Steps on how to build a Limousine!

In fact, auto manufacturers don't try their hands at producing limousine. Here's how to build a Limousine!

What people haven’t really noticed is that manufacturers of car do not really manufacture the limousine. It has also been known that most of the cars being converted to limos are ordinary cars that were converted and elongated. In the United States and other advanced countries, creating a limousine is very tedious and it’s also a lucrative enterprise. Most of these countries convert normal cars into limousines and rent them out. Any SUV or sedan can be restructured into limousine. For you to build a full working functional limo, it will take you about 27 days to a month. That’s why we at naijacarnews.com are going to fill you in on every detail on how to build a limousine.

how limos are made

1. First step on how to build a limousine- take your car to the garage

So the identification of the vehicle we will restructure has been known and it is a white neat Chrysler. Before working on the car, to begin, you wash the vehicle thoroughly to remove dust and dirt particles. Then after this you strip down the car by removing the tank, seats, windows, drive shafts and the rest. 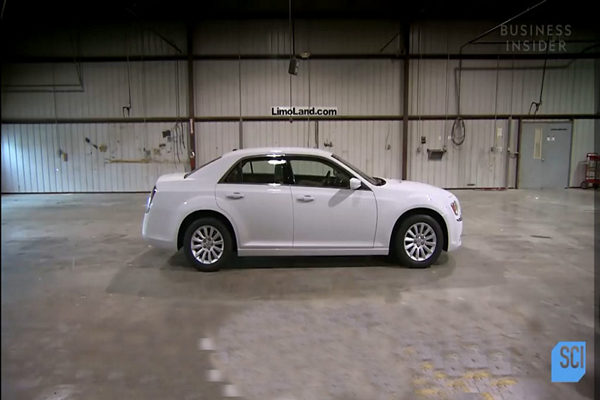 We want to use a white Chrysler

2. Second step on how to build a limousine- dissect the vehicle into 2 same parts

Before you cut the car, you need to take a detailed measurement so as to avoid costly mistakes. With the aid of an electric saw, the vehicle is dissected into two same parts. You start dissecting gently from the rooftop then down. After dissecting the vehicle, the person working on it will take the front part away then put the boot half part of the vehicle in which the limo is supposed to be assembled gradually. 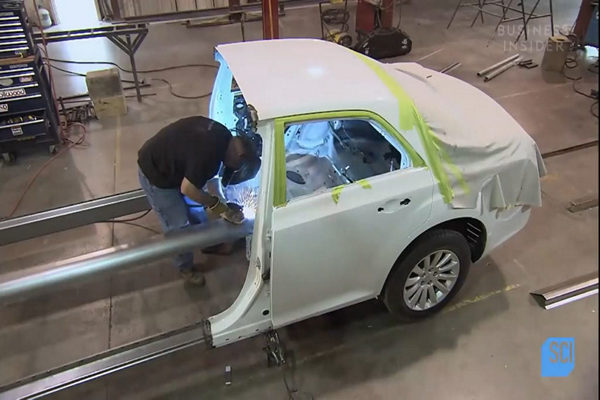 Weld the iron rails to the car

3. Third step on how to build a limousine- constructing the frames

After doing all this, then you start constructing the limo. You insert iron steels on the sides of the vehicle then put together the front and the back you had cut earlier then you proceed by welding them together. After this you measure both sides to see if the limo is off equal parts. After that process, the shaft drive tunnel is installed and this drive shaft tunnel is where the exhaust is and also the steel shaft drive. Then they start welding it to the main tunnel of the vehicle. The floor is equipped with tunnel steel that is galvanized before welding it accurately.

Start by inserting steel rails on both sides of the car 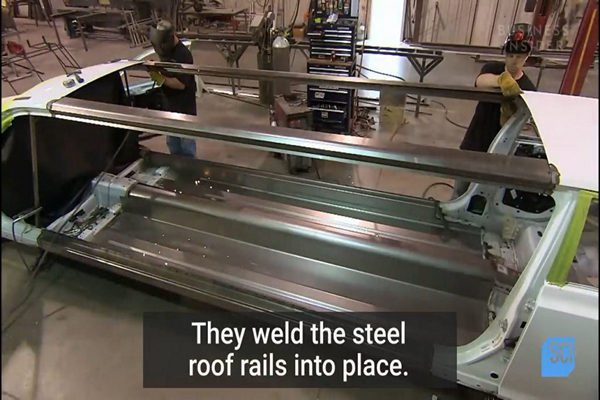 They weld the steel roof rails into place

4. Fourth step on how to build a limousine- you roof it 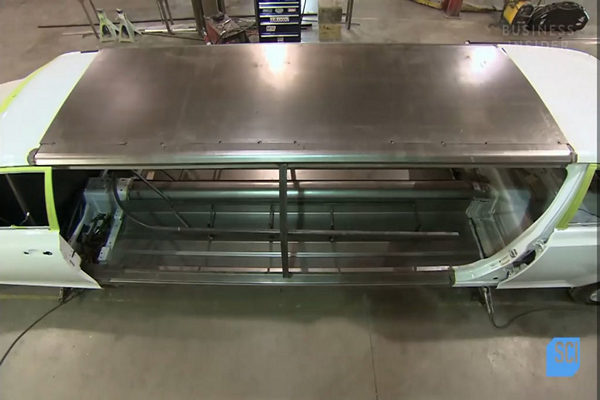 5. Fifth step on how to build a limousine- install panel on both sides

After the bars on the side have been installed, the exterior body panel is installed and they are accurate with a steel bars that is hardened, then you screw the panel on the body into place and then later after when the panel is solidly bonded to the frame of the limo, they will be detached. 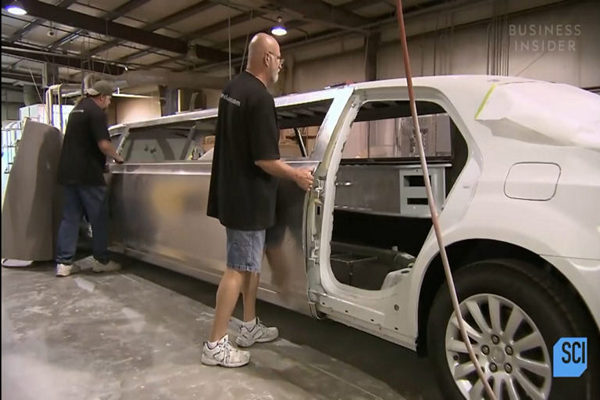 Installation of side bars and side panels begins

6. Sixth step on how to build a limousine- do the paint work

After the panels for the sides have been attached firmly to the cars frame, you fix the doors and after you fix the doors, you paint the body of the limo. You spray the vehicle with 3 paint coats, and then double coating that is protective and clear is applied. You can as well choose which ever color you like but most limos come in either black or white. Once you complete the paint work, you install the side glass that is meant for safety and it’s also laminated. Then after this you attach a vinyl top carefully after you have applied contact cement on the limousines' roof. 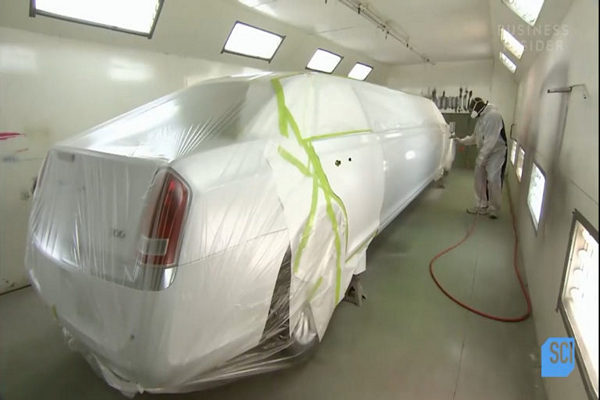 The car is sprayed with 3 coats of paint, then two coats of protective clear coating is applied

7. Seventh step on how to build a limousine- design the interior

The interior takes center stage after you have completed the exterior. This is actually the most important part in building a limousine so the first thing to do is to install the seats, then follows the wine luxurious bar, and after these, other essentials follow like the music system, lights, fridge, cabinets. After that, you call someone that installs electrical systems to come and install electrical components. The panels used in controlling are located behind the seat of the driver or the dashboard. This enables proper communication between both the occupants of car and the driver. Then you a screen and a video monitor. 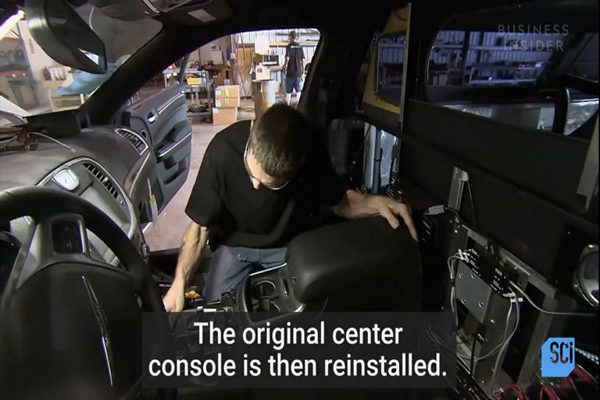 The original center console is then reinstalled

The chrysler has just been transformed into a limo in just under a month, and don’t forget the chrome wheels. 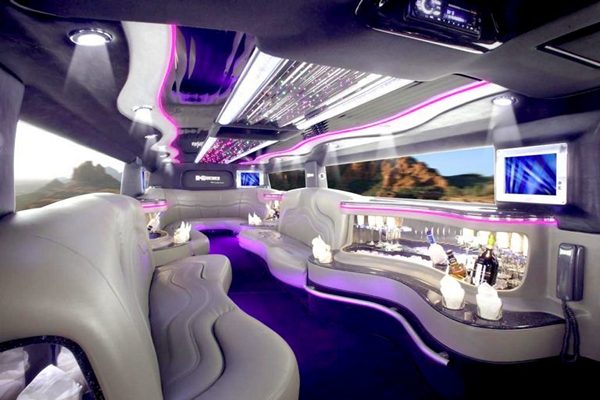 In just 21 days, the ordinary Chrysler car has now be transformed into a luxurious limousine 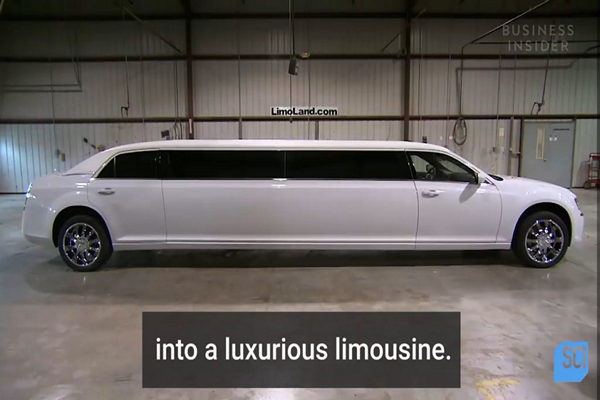 >>> Want to know more about other updated models? Stay tuned to our New Releases for the latest cars unveiled in the local and international market!