There is the notion that the 2020 Bentley Continental GT V8 is not as good as the GT W12. However, is this really true? Check detailed specs of this new release here! 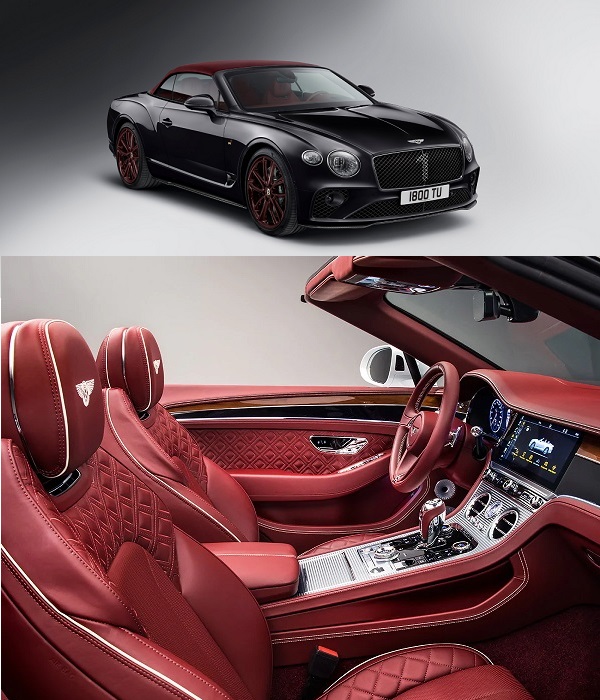 However, the differences between both may be so little, that they practically don't matter. Before you decide on which model to buy, let’s explore some of their features and see if the W12  crowd are actually right or very wrong. 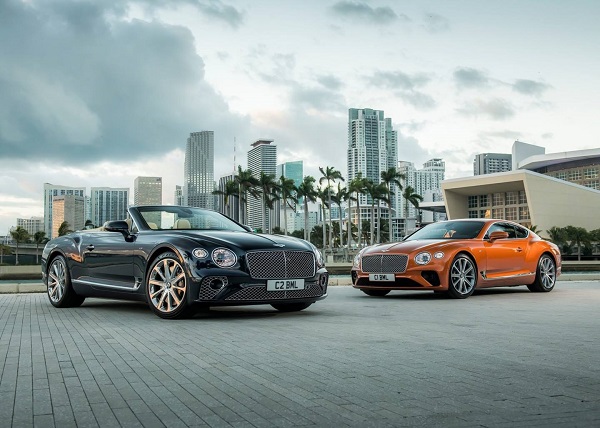 The V8 comes with convertible and coupe body types

The difference between the engines of the 4-liters, eight cylinder V8 and the 6-liters, twelve cylinder W12 is that the W12 is heavier and obviously more powerful than the V8, which however is sportier. It is noteworthy that the engine in V8 is similar to that in Porsche Panamera Turbo, thereby making it  a fast, responsive engine. It also redlines around 6,800 rpm similarly to a Honda B16 engine that is tuned. These qualities qualify it to be the highest speed operating motor Bentley has ever produced.

The all-wheel- drive system of the V8 routes the power that comes from the engine to all wheels. Its back AWD makes it possible for the system to allow the vehicle to act like a rear wheel GT car. However, the effectiveness of the traction and grip is affected when the system detects slip.

The new position of both engines, a little farther to the back, has reduced the effect it had on the steering wheel. Now the cars ride without tht front heavy feel. Interestingly, all models of Continental GT have the same weight distribution which is 55% on the fore axle and 45% on the back axle.

Furthermore, we have the back up of three chambers that provide nice ride control and adaptive dampers. This three-chamber air suspension comes with the V8, thereby allowing different degrees of comfort, which depends on the driving mode you are going for; be it Comfort, Sport, Bentley Mode or Custom. It is instructive that you can immediately tell which mode you are in by the response of the engines. 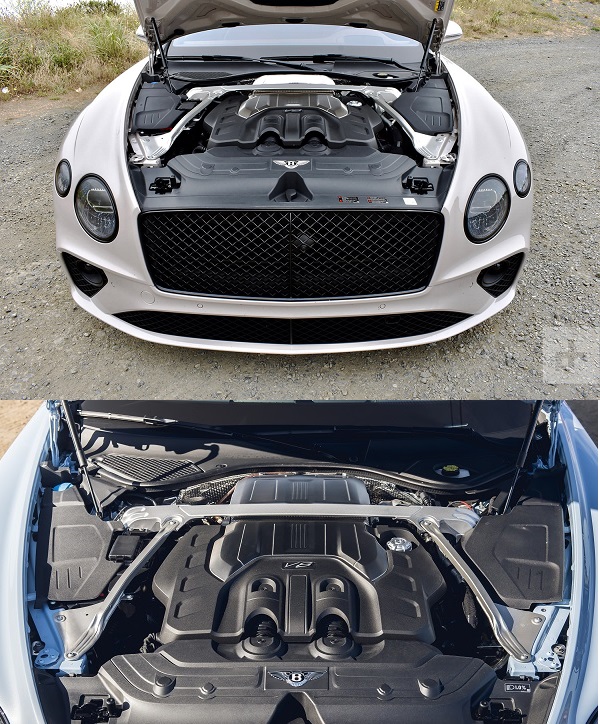 The four liter, V8 engine has enough power to push the car

Both bodies of the W12 and v8 are entirely made of aluminum as compared to the formr versions of the Bentley Continental GT, which are primarily steel skined. Having said that, the eight cylinder car still remains the lighter vehile. The V8 basic trim is  lighter by 130 pounds than the W12 at 4926 lbs. This lighter weight more or less even out the comparative advantage of a larger engine enjoyed by the W12. The V8 is only one tenth of  second slower at 3.4 seconds in the race from 0-60mph.

The V8 is capable of producing 542 horsepower and 568 pound-feet of torque, while the W12 is capable of producing 626 horsepower and 664 pound-feet of torque. The GT V8 Coupe can reach 96 kilometers per hour in 3.9 seconds while the W12 can reach 0-100 kilometer per hour in 3.7 seconds. This shows that the W12 is faster than the V8 but by only 0.3 seconds in 60 mph while the top speed is impressively 198mph. The W12 however, can top out around 207 mph. The difference between the two in this is as a result of the peak torque. The W12 provides more torque while the V8 arrives at just marginally less than 2,000 rpm, specifically, at 1,960 to 4,500 rpm; then stays around a bit more. This literally means you can’t lose much when it comes to acceleration then top speed when going for the V8 engine.

The W12 is able to achieve its peak torque at quite low engine speeds; but because the V8 is lighter, it emits this energetic boost faster than W12. We could as well say the W12 is old school because it delivers like a heavy locomotive as far as response is concerned. The V8 on its own reacts very quickly, both in its agility and sportiness. With the way it responds, the V8 appears sharper, energetic and naughtier. It consistently seems thrilling.

The V8 comes with the same eight-speed dual-clutch automatic transmission, just like the W12 variant. Unfortunately, the shift paddles are mounted to the steering wheel, which is located far inboard the wheel’s rim. They can’t be accessed with one’s hands on the wheel. You will need to stretch before accessing it. Eventually, when it is reached, you will need to use a delicate touch to hold the gears. 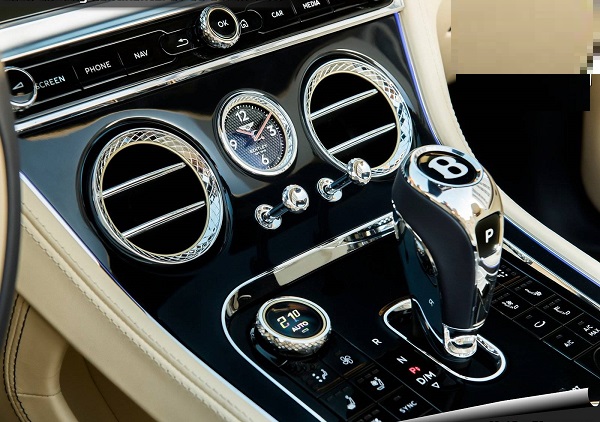 Transmission is an 8 speed dual clutch affair for the v8

>>> A formidable rival among the tops: 2020 Audi RS7 Sportback packs 591 HP into a beautiful body

Bentleys are nothing if not pragons of style. Outwardly, there is not much to differentiate these two models, that is if you discountenance the quad tail pipes of the W12. The W12 in addition has two big oval outlets at the back. The V8 has a badging on its front fenders that give it away however. 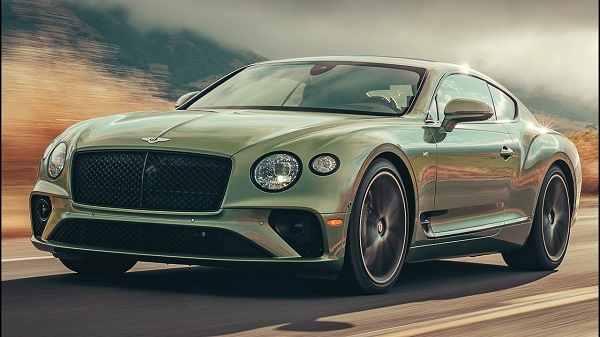 The V8 is indistinguisale from the W12 outwardly

Finest leather and original wood veneers are copiously used to furnish the cabins of both cars. We also have the presence of Bentley’s unique Rotating Display unit which allows you to control your display unit on the 12.3 inch touch screen. In fact, there’s even an option of a blank screen if you don’t want to be distracted on the journey. Alas, the V8 does not sport Andriod Auto and so owners will make do with Apple CarPlay. 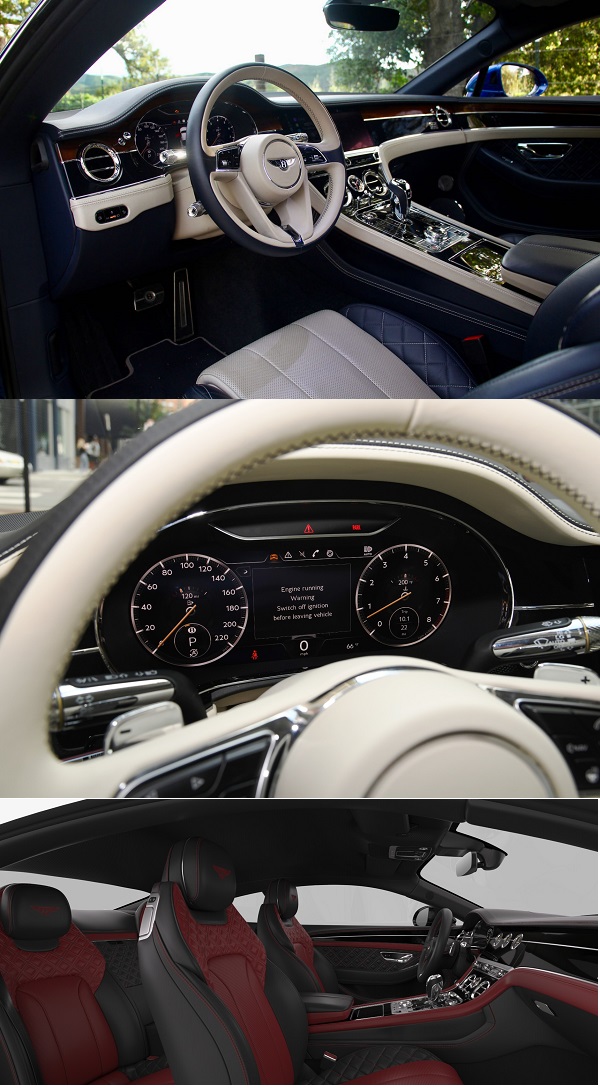 The interior of the Bentley Continental GT is always classic

The V8 looks about the same than the W12, and while marginally slower in a long race, is more responsive. It is more fuel economical too. Similarly to the W12, economy is assisted by its cylinder deactivation. Also, the prices of both differ. The 2020 Bentley Continental GT V8 is sold around ₦72.4 million while the W12 is sold around ₦78.2 million, a difference that can get you a brand new, mid-size Hyundai Accent. The choice is entirely yours to make now.

>>> Stay in the loop with happenings around the automotive industry at New Releases on Naijacarnews.com!