Would it be right to say that the new 2019 Ford F-150 RTR is quite similar to the Silverado Trailboss and the Ram Rebel? Find out in this post!

For all the automobile enthusiasts that have been wondering why the Ford F-150 only has limited ways to modify it, NaijaCarNews.com brings you good news as RTR vehicles seem to have got you covered this time with its brand-new model.

This model is called the Ford F-150 RTR and it gives a conventional Ford truck just the extra panache it needs together with off-road capabilities.

Although, the one thing that this RTR truck does not provide is a notable power bump up. The company, however, claims that these changes can be easily fitted to any of the Ford F-150 trucks that comes with four doors except for the Raptor model.

This new RTR variant starts with few suspension components like a Fox supplied series 2.0 shocks as well as fitted 20-inch wheels (black) that are very much wrapped with the Nitto Ridge Grappler tires in this new truck. 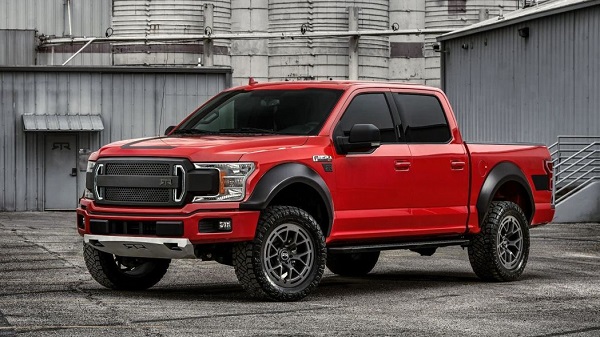 These little changes should increase the truck’s off-road capabilities to an extent coupled with a Ford Performance Catback exhaust system which should really bring some serious drama to the truck’s soundtrack. However, this exhaust is compatible only if a buyer chose the 5.0L V8-engine variant or one of the two available EcoBoost V6 engine variants.

How can this truck be an RTR without a face? RTR has said that the new grille in this truck should provide increased airflow to the truck’s radiator while at the same time integrating the visible and relatively large LED lights into it as well. Looking below this grille, one will easily reach the skid plate which has a giant RTR lettering boldly on it. There is also an RTR badging (graphics package) which makes it clear for anybody not to mistake it for none other than an RTR F-150.

The interior is laid with a couple of custom touches in such a serialized dash plague which is personally autographed by Vaughn Gittin Jr. himself with some floor liners that are RTR-specific.

>>> To see more up-to-date News and reports like this, navigate to our car news, auto-launch, and automotive industry updates.