After being absent from the market since 2011, Ford Ranger makes a big comeback with its 2019 model! You will be amazed by its features. Check it out!

For lovers of Ford, 2011 was quite memorable. It was the last time the Ford Ranger was available on the market. After that year, the brand went into oblivion. Having kicked of in 1983, the automaker decided to give it a break. Suffice to say that the Ranger was worn out. Not much had been done to upgrade it since the early 90s. And with stiff competition sprouting from all angles, it did not stand a chance. So, it decided to take some time off to figure out itself.

From all indications, the Ranger did a lot of soul-searching, and finally found itself again. It is set to make a huge comeback to the market. Naijauto gathered that the Ranger is coming back to dominate the mid-sized truck market with the 2019 Ford Ranger Raptor. You are about to find out why we think so.

There is no contest to the fact that the 2019 Ford Ranger has all it takes to be a Ranger, it looks the part effortlessly. Nicknamed the Raptor, it offers users three different trims.

It also offers part time four-wheel-drive and rear-wheel drive variations. Users have the options of upgrading the former with the FX4 Off-Road package available. 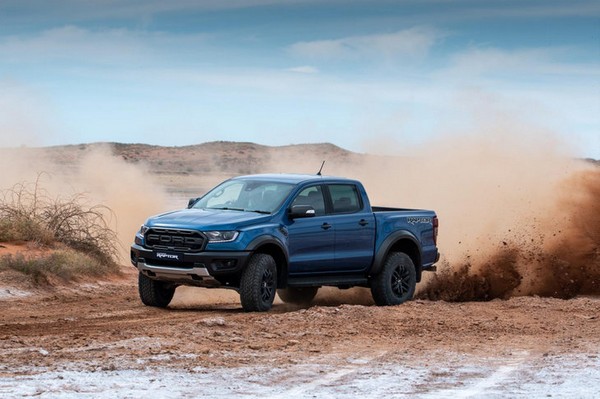 The Ranger is a good choice for an off-road trip

One engine is what is offered in all trims of the Ranger. If you think this could be a problem, you are wrong. The four-cylinder 2.3-liter EcoBoost engine has proven to be sufficient. The 2.7-liter V6 available in the bigger Ford F-150 would certainly be too much for all the power its musters, so downsizing was a good idea.

When a vehicle is tagged a Raptor just like the Ranger, you expect it to be unapologetically ruthless in performance. At the sound of its acceleration, you should feel a vibration in the car. And if your heart is not made of stone, you should even be afraid to get into it for a ride. No doubt the diesel engine of the Ranger is okay on the road, but when off-road, you do not get that extraordinary performance. The toughness you might have been forward to is nowhere to be found. Riding on tarmac, you get the feeling that the four-cylinder engine is being tortured. And this is uninspiring to push further. In times like this, you miss the Ford Edge or Mondeo as the engines of those cars would not be a kill joy for an off-road ride.

Noticeable in some of Ford’s products is the “unfinished-ness” of their gears. It makes you wonder if they were left halfway or the automaker was not sure of what direction to take with them. But there is a pleasant change with the 10-soeed gearbox of the Ranger.

>>> Another design by Ford this year: Check out the new design-focused 2019 Ford F-150 RTR off-roader

The interior of the ranger showcases a functional switch gear and logical instrumentation. Installed to control the 4X4s transfer case is a rotary knob with a tow down mode in neutral state enabling towing. There are also buttons used for hill descent control, trail control and rear differential locking. It offers a straight-pull architecture for the shifter of its 10-speed console. Ford offers an impressive infotainment with a sync 3 design.

There is also provision for the much loved Android Auto and Apple CarPlay. The size of the touchscreen would have been better if it was bigger. Being so small, operating it seems difficult. 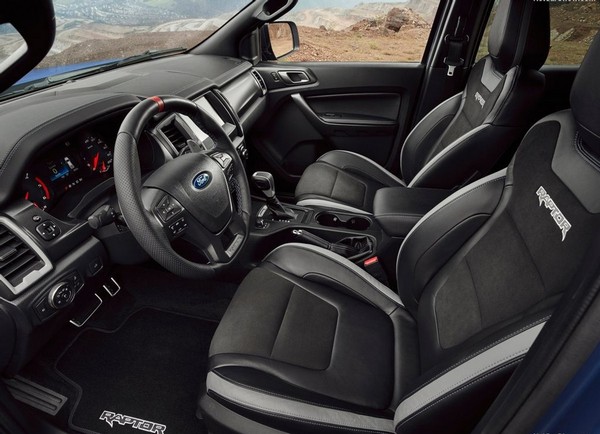 The front seats have enough leg room for comfort

One of the standard features in the lineup is automatic emergency braking. This is commendable as users of the available trims are kept out of harm’s way.

Taking it a notch higher to the XLT trim, you get to enjoy more advanced safety features including the following:

Below are the summary of Ford Ranger Raptor 2019 specifications, compiled by Naijacarnews.com! 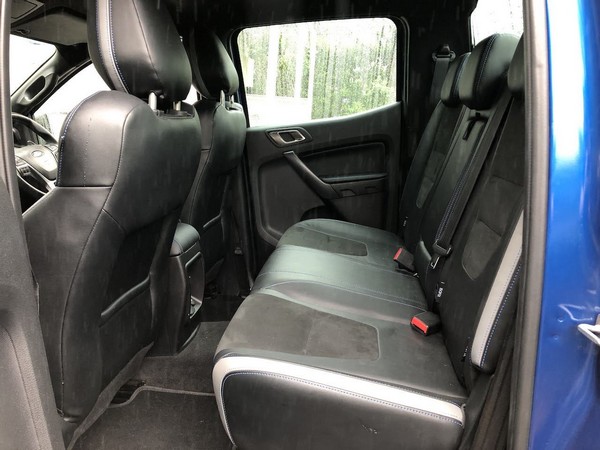 With all these features, it is almost certain that the runaway Ford Ranger Raptor 2019 will do well in the market. Having been away for some years, the vacuum it has created in its fans all over the world makes demand for it even higher.