Do you like off-road trucks? How about a quick review of the latest 2019 Toyota Tundra TRD Pro? This post has all the details you need. Check it out now!

Many of you Naijacarnews readers might have been expecting us to make reviews on trucks and off-roaders for long. Well, the good news is; from now on, expect more such reviews.

In this review, we have picked one of the ultimate Toyota pickup truck that is loved by many off-road auto enthusiasts – 2019 Toyota Tundra TRD Pro.

This powerful Toyota Tundra off-roader has debuted since far back in the year 2007 but has been getting few updates frequently as the years go by. In car years, one might call this truck “ancient” but the new 2019 Tundra TRD Pro has got some seriously heavy update despite being dropped in the year 2018 from the lineups. The design has not really changed so much but the Japanese automaker has definitely put its money right at the spot where it truly matters when it comes to this new truck. 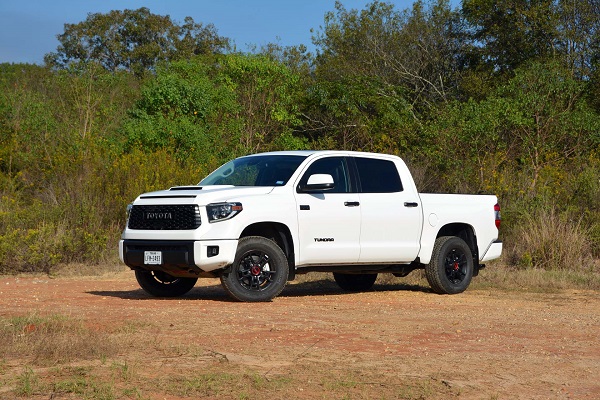 When it comes to pickup truck, let's call out Tundra!

The new truck features Fox racing shocks which now provides it with enough damping on all of its four corners. Its rear shocks are even paired new reservoirs to help hold an additional volume of oil thereby making it able to support higher temperatures during any extreme use of the truck. These Fox shocks are paired with the TRD’s springs to give this new truck a 2-inch lift – with beefier leaf springs fitted out back in the truck. With all this, the new truck gets 1.5 inches of more wheel travel right up front and a little over 2 inches in its back unlike the older TRD Pro. 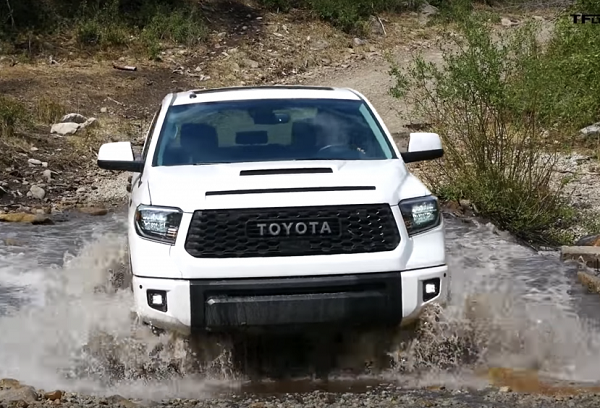 Some people might be asking; why all the extra suspension and stuff? Well, it’s meant for drivers/owners to hit some more rough roads while enjoying the ride!

The huge tires (275/65R18s) and the Fox racing shocks featured in this new truck provides it with an incredible amount of actual insulation from any potholed roads like the ones we have in Nigeria as it should just roll over the bumps like “nothing ever happened”.

>>> Do you fancy luxury cars? [Photos] Meet the one and only Bentley EXP 100 GT spectacular concept car for 2035

An auto enthusiast/blogger when describing his driving experience in this new TRD Pro truck said;

"When I turned onto dirt roads, the Tundra continued to exhibit the same soft-for-a-truck ride. It's great fun to kick the rear end out and slide about on loose surfaces while listening to the soundtrack of the Tundra's 5.7-liter V8. Toyota makes the TRD dual exhaust standard on the TRD Pro, and it's the perfect addition to this truck's personality. I just expect it to sound mean and guttural after looking at it, and the TRD Pro does not disappoint."

When commenting on the engine performance of the truck, he said;

"Using the 381 horsepower and 401 pound-feet of torque to blast through deep mud is an absolute blast — though the 13.7 mpg I returned, well, that was not. I sent it into some intimidating-looking spots that looked reserved for heavy-duty tractor equipment, and the Tundra just plowed through as though nothing was even there. Clearly, I hadn't come close to reaching the limits of this truck's capabilities. Toyota says the rubber that comes stock on the TRD Pro is all-terrain-rated, but we think it looks a little meek compared to the setup on trucks like the Ford F-150 Raptor and Chevy Colorado ZR2. That said, those trucks are designed to handle a bit more than what this Toyota is meant to do."

It can be all fun and sweet to be blasting around pockmarked roads and dirt, but it is really difficult to ignore the truck’s dated interior and lack of some features with its woeful fuel economy, all which may be valid reasons to avoid the Tundra TRD Pro.

Any vehicle/truck from Ram, GM or Ford, is going to feature a 10 years newer look and feel, and have many basic features which are lacking in this new Tundra truck like a modern infotainment system, heated seats, and automatic climate control. It can be really difficult to overlook all of these issues especially at a $52,474 price point of this new truck.

What about the interior of the 2019 Toyota Tundra TRD PRO? 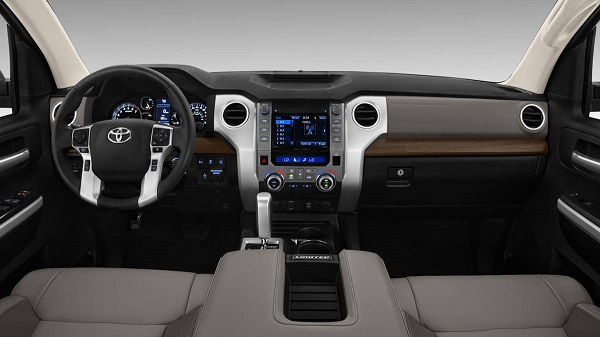 The Tundra’s interior is ruled by hard plastics, but it does pack some really cool TRD specific features like the red accents and its TRD logos which are splashed about inside. Any buyer that hasn’t really seen or experienced what the 2019 Tundra’s competitions have to offer might not be totally cool with the new truck, but come on, we do not live in a vacuum, Toyota really has a lot to catch up on.

Anyone will be right to call this truck “Simple and Honest”, and some people could even find some refreshment and romance in the pared-down experience in this truck, but we believe that Toyota should really price this truck such that it reflects the limitations of the truck. Until that time, it might be that this 2019 Toyota Tundra TRD Pro truck would only end up in the garages of the most off-road automobile or Toyota enthusiasts around the world instead it biting into the sales and competitive world of the Chevy Trail Boss, Ram Rebel and Ford Raptor.

For all those that might be expecting some detailed review on the interior of this new 2019 Toyota Tundra TRD Pro pickup truck, there isn’t really much to say.

Instead, you can watch a short video below where the truck is being reviewed entirely;

We believe that if Toyota can just get its act together by giving this 2019 Toyota Tundra TRD Pro truck a super-impressive interior that matches its badass metallic exterior, the truck might be a winner. Anything else from this, we wouldn’t be surprised if the new truck doesn’t do well on the global truck sales market.

Don’t agree with us?

It’s okay. Everyone is entitled to his/her own opinions and we might be obviously proved wrong if the new Tundra could begin to rake in massive sales. So, let’s all wait and see.

>>> Naijacarnews updates you with the latest auto releases. Check out!