Price of Peugeot 508 in Nigeria (for all model years)

Are you thinking of buying the latest Peugeot product in the Market? Click here to see the Price of Peugeot 508 in Nigeria for all model years and car types!

This is an automobile brand that most Nigerians grew up to know about. Its name is written in the sand of time, among the pioneer automotive companies in Nigeria. Peugeot used to be the only official brand for all government officers, military personnel and for several other official purposes. Though many popular automobile products might have replaced Peugeot as the official car in some offices, many still love the symbol, adaptability, and quality that this automotive industry has brought to the shore of Nigeria. Peugeot has decided not to be left alone or brushed aside in the automotive technological advancement race, which is prominent in their new release. Here on Naijacarnews, we will show you all you need to know about the price of Peugeot 508 in Nigeria. 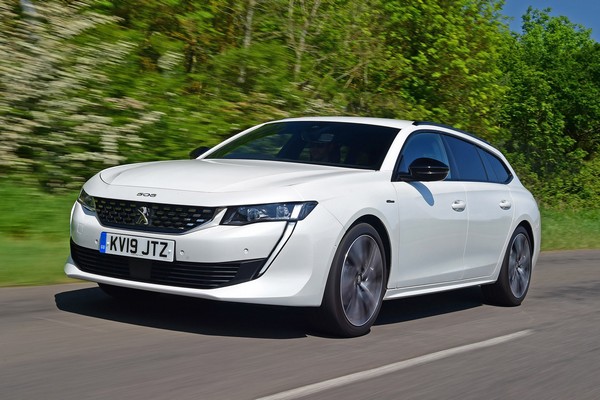 Though the first version of the Peugeot 508 was released in 2010, to get the brand new of those earlier models might be pretty difficult since they have phased out of the market. That's why we will bring to you the prices of the most recent and upgraded brand new Peugeot 508 units.

The newly unveiled 2019 model is not yet common in the Nigerian auto market, so the possibility of getting it is a bit challenging for now. However, the suggested retail price of this hot car has already been announced on the official website of Peugeot Nigeria.

If you can't afford a brand new 508, you can surely go for a Tokunbo model whose condition might be as sleek as that of a brand new. The price of these foreign used vehicles is generally higher than locally used items, considering its well-maintained car body and fees for related procedures.

When buying a foreign used Peugeot 508, please take notice of some factors like currency exchange rate, clearance fees, delivery cost or certain types of car papers to avoid troubles with Nigerian customs or even police later.

Luckily, there are many Nigerian used Peugeot 508 for sale with a much more affordable price. With only 9.5 million nairas, you can get a Peugeot 508 2015 model year in probably good condition which will cost ₦15 million if it is Tokunbo.

However, when opting for a locally-used car, make sure you bring a mechanic to inspect the vehicle with you. Be aware of common tricks from sellers to make their car shine and cover minor faults inside.

>>> Other car price lists on Naijacarnews.com:

The exterior design of this Peugeot product is dynamic with an impression of assertiveness and flawless driving experience. It is the first model in its range to have an iconic Peugeot logo at the center of the grille, which has a unique feline Peugeot light. Let's take a look at some of the Peugeot 508 model pictures below! Words can't fully describe its beauty. 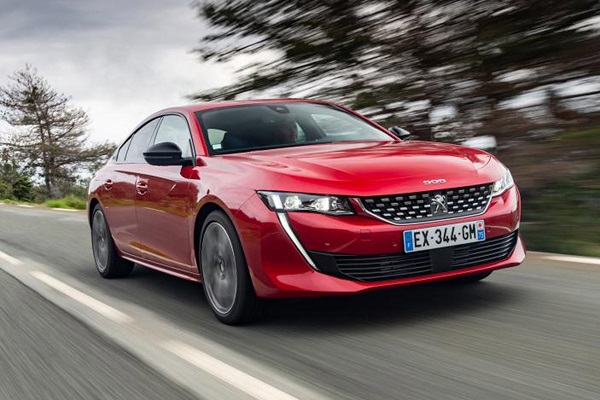 It features a LED day time running light at the front of the car. A look at the back, you will see LED taillights. These lights also display feline impression, a symbol accustomed with Peugeot. You are sure of getting the full LED light in GT but optional in Allure. Most importantly, these lights are power savers and environmentally friendly. 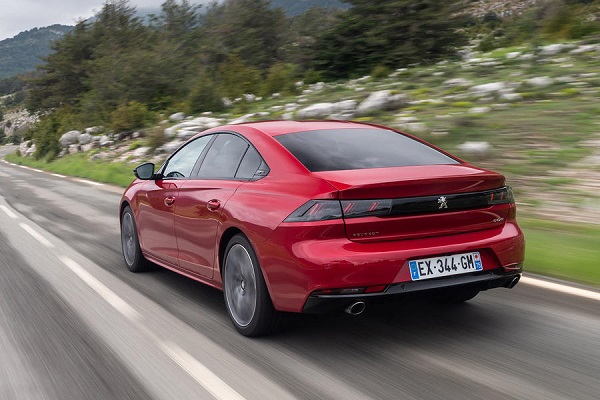 Look from either front or rear, it doesn't matter to the Peugeot 508!

Unlike the older version, the new Peugeot 508 promises a better refined and structured bumper that adds strength to the car. With the addition of its three claws rear lights, the possibility is limitless.

When it comes, expect nothing less of quality from the Peugeot 508. With its quality tires, it also boasts of stylish alloy wheels of 17”, 18” and 19”.

The Alloy wheel is eye-catching and very stylish

A look at the interior onboard technology in the brand new 508 Peugeot will make you change your mind. The dashboard is very sleek, elegant and with an added technology in touchscreen display, all easily within reach. With just the tap of a finger, you can control the entire navigation control and entertainment system.

The inner cabin is very spacious with enough room for passengers to experience unlimited comfort. It comes with an automatic quad-zone air conditioning system which meets the needs of each passenger. Moreover, the AC has the ability to adapt to changes in temperature outside the car. 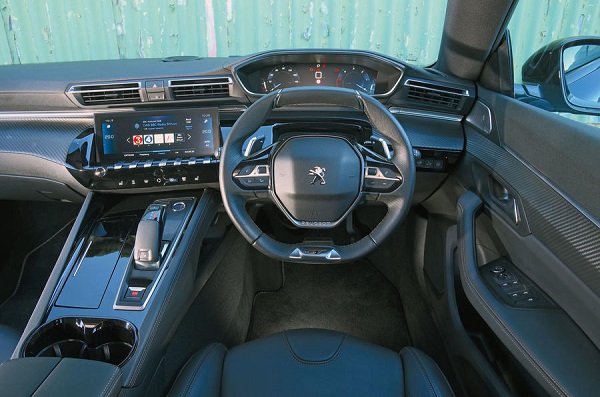 The Peugeot 508 offers options in either Allure or GT in its colored Heads Up Display (HUD) which allows the driver to store essential information such as vehicle speed, cruise control, speed limiter, navigational information, and driver’s information.

The seat is very captivating and stylish at the same time. It has a premium quality black leather trim that varies on Allure or GT. You can adjust the front seat electrically, which are always heated. Other exciting features include: 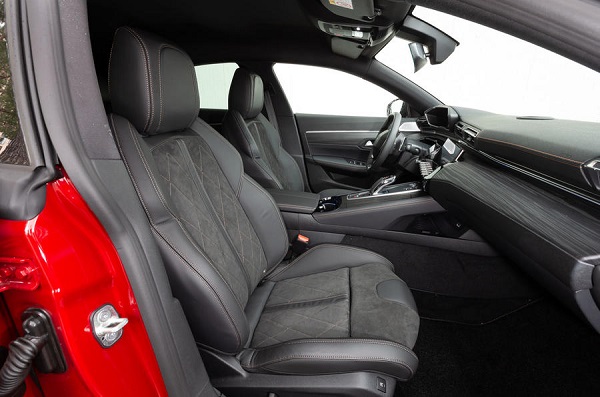 The electrically adjustable seat is built to comfort, which makes driving so easy

>>> Where do you think Peugeot rules the market? Most popular cars in each nation & Bestsellers in the world

This product features an HDI engine (common rail) powered by diesel. The exciting news here is that its HDI 112 (1.6liter) can fit perfectly with the micro-hybrid system featuring an electronically gearbox (automatic) - a big plus to its fuel efficiency. This is slightly similar to that of Volkswagen Passat Bluemotion, but the 508 Peugeot has an advantage of a bigger tank which is enough to cover 1017 miles.

The production made known their interest in reducing environmental pollution, which was made possible by dropping its emission from 114g/km to 109g/km. In its top GT version, you should expect nothing less than 201 horsepower with a 2.2-liter supercharged engine. This engine is capable of producing as much as 338 Ibf fleet of torque. 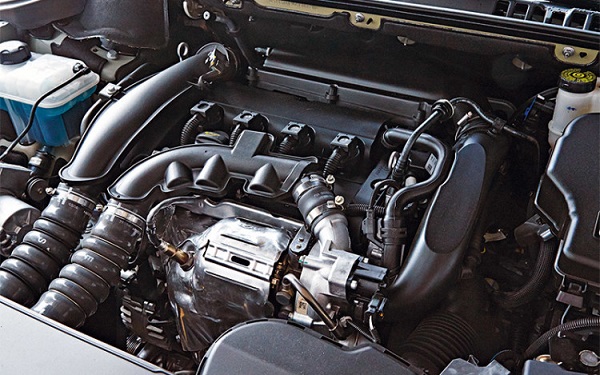 Whether Allure or GT, the diesel engine is the highlight of Peugeot 508

Peugeot 508 comes with an automatic gearbox (six-speed torque) which can be switched to manual through central selector or paddle. Also, Peugeot has not limited its 508 series only to the diesel engine. The new 508 sedan introduces a petrol-powered engine with 121kw THP turbo petrol engine with the notable stop-and-start technology.

>>> See where you can buy your Peugeot: Reviews of 4 top Peugeot dealerships in Nigeria

If you intend to buy a brand new, you can't miss these comments on both the advantages and disadvantages of the recent models. For those falling for Tokunbo or Nigerian used cars, these reviews are also beneficial to have an overview of the automaker's focus, whether they prioritize the fashion beauty or engine performance.

You can also refer to some customers' reviews on the prestigious car review website carbuyer.co.uk when buying used Peugeot 508!

"I bought this car used at 60.000 miles after a mechanical check by an experienced mechanic. the car had its automatic gearbox recently repaired but that was all. Check was fine and no mechanical problems found. The engine runs smoothly and is very very economical (less than 6 lt/100 km at urban usage). The engine is not powerful but does the job. The gearbox is a little peculiar but if you understand its habits it is not a problem. Unfortunately, the navigation/rado unit proved problematic and I have to replace it."

"I love this car. The first thing that struck me was how comfortable the seats are, which my wife has also commented upon. The cabin is quiet and calming, especially when driving at night with the overhead ambient lighting. The ride is pretty smooth and the (163bhp) engine has very hearty acceleration for safe overtaking...My kids love the "secret" button for opening the boot too."

Peugeot Automobile Nigeria Limited (PAN) has been at the forefront of the automotive industry in Nigeria since 1969 when Nigeria was still under a military rule headed by General Yakubu Gowon. Earlier, 16 automobile companies were invited and asked to present a proposal which went in favor of Peugeot Automobile in France in 1971. The success of that proposal birthed the PAN limited which was a partnership between the Peugeot Manufacturing Company from France and the Nigerian government.

This eventually led to the setting up an assembly plant in Kaduna and was later commissioned by the same military head of state, Yakubu Gowon in 1975. Production started immediately that year and about 60,000 cars were assembled and distributed nationwide. The number increased over time and Peugeot became a household name in Nigeria. 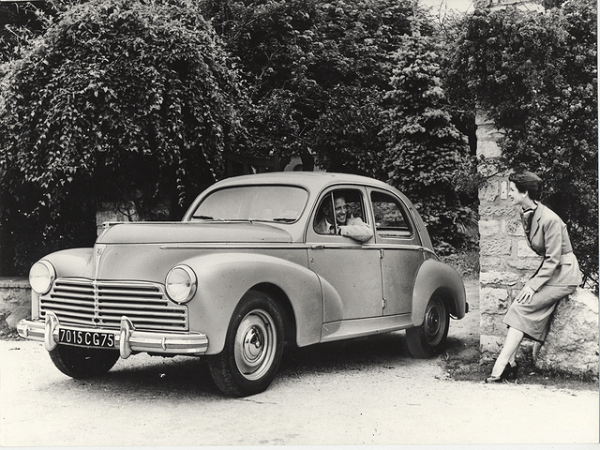 As far back to the 1970s, Peugeot was the automobile brand in vogue in Nigeria

The Peugeot 508 was released in 2010 by the French automaker, which was later seconded by the production of the estate version, the Peugeot 508 SW in 2011. The idea behind this product was to replace the already existing Peugeot 406 and 407. There are lots of similarities in its engine options with the second generation PSA Peugeot Citroen C5 also manufactured in China.

As of 2014, the new generation of this model was introduced, including new Peugeot 508, RXH and 508 SW. These new products made some exciting upgrades and redesigns on the previous version, which were notable in terms of engine performance, fuel efficiency and even body build. 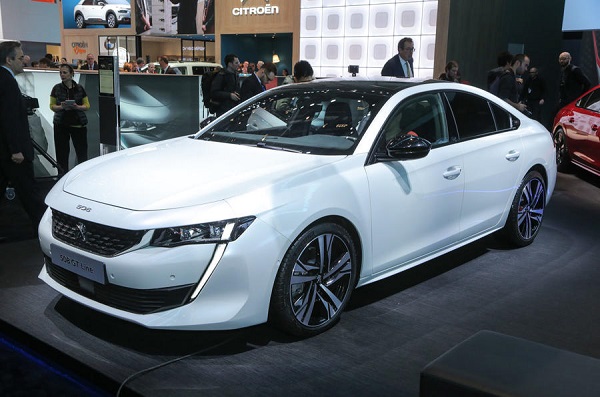 The newly released Peugeot are seriously competing with other big brands

This product of Peugeot was exhibited at the Frankfurt Auto show in 2011 where the French automaker revealed it as an electric-hybrid crossover estate variant of the Peugeot 508. What separates RXH from the ordinary 508 includes a new color-coded grille and flared wheel arches. Its powertrain is a combination of 2.0 liter HDI Fap diesel engine (120KW) and a 28KW electric car to ensure a better fuel economy.

It was launched in a single high specification limited edition and was finally released in early 2012. This luxury version of the 508 is a rival of high-end models such as the Audi A4 All road, the Volvo XC70, the Passat Alltrack, and BMW 3 Series XDrive. 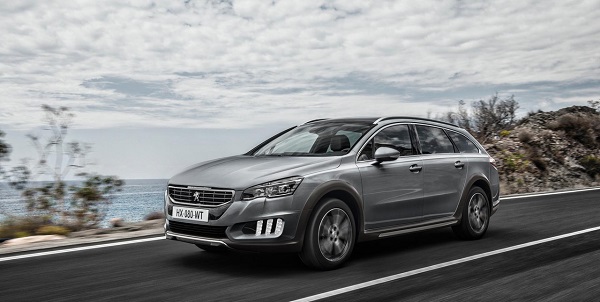 The Peugeot RXH is a new perspective in design and functionality