Festus Okotie Eboh cars, net worth, death and other facts

Chief Okotie-Eboh was not only the former Minister of Finance in the Nigerian First Republic, but also the most dressed politician. See Festus Okotie Eboh car fact & other details below!

Born 18 July, 1912, Chief Festus Okotie-Eboh (also known as Mr. Asheikun) was a prominent Nigerian politician and the former Minister of Finance during the regime of Sir Abubakar Tafawa Balewa.

His father was Chief Okotie-Eboh, an Itsekiri Prince from the Warri division. The Urhobo native turned Itsekiri man was the National Treasurer of NCNC, the Nigerian First Republic party, and also their Federal Parliament party leader, as a replacement for K.O Mbadiwe. In 1942, Okotie Eboh married a woman from Itsekiri. He had his primary education at Sapele Baptist Primary School from 1932 to 1936, where he became a teacher in 1937 in the same school.

It's not random that Naijacarnews write about Fetus Okotie Eboh cars when his background showed no interest in luxury stuff. Wait till you read the entire introduction! 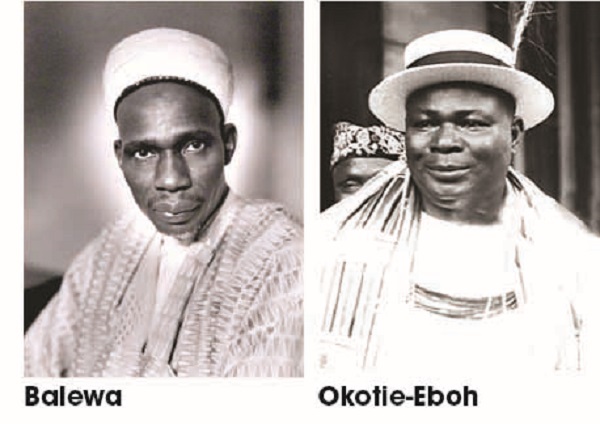 Mr. Asheikun or Chief Okotie-Eboh was regarded as the most flamboyant Nigerian politician of all time. He was known for his exquisite taste in wears, which made him the most expensive dressed political personality from Nigeria.

Now you are curious about his cars, properties and net worth right? Let's find out!

Despite series of criticisms from Nigerians for his ostentatious lifestyles and alleged siphoning of public funds, he was indeed a very wealthy man. Not only rich, but Festus Okotie Eboh was also very powerful and influential within and outside the country.

In 1956, during the Queen courtesy visit to Nigeria, Festus Eboh was seen dressing in flowing garments with chain a yard long, held by a boy. He was nicknamed “Omimi-Ejoh” or “Ejoh Ibile” which means ‘man with long feature and flowing wrappers’ for his signatory wrappers that often competed with gowns used by brides in wedding ceremonies. 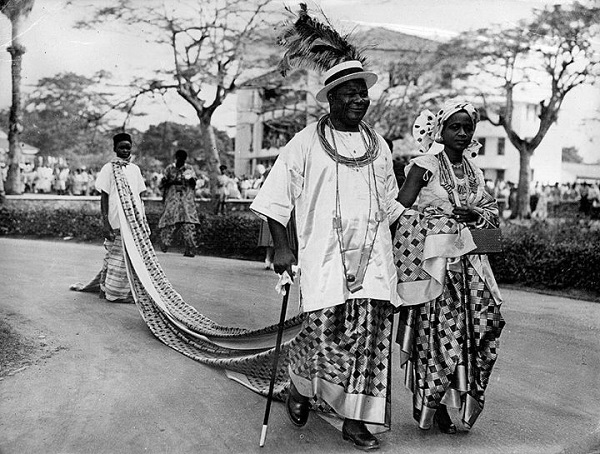 Wearing of long flowing wrapper, tied to a boy, was one of the evidences of luxury lifestyle of Festus Okotie Eboh

In general, there is no way anybody could truly estimate how much Festus Okotie Eboh net worth is. The only fact is; he was a very rich man when he was alive.

If we are allowed to give a comment, the lifestyle of Mr. Asheikun somehow resembles that of Dino Melaye - a controversial and flamboyant politician today. And to afford such extravagant properties to show off, his net worth should be at least the same as Dino's which is estimated from $100 million to $800 million by various sources.

>>> To imagine how Okotie Eboh would enjoy his life if he lived in our time, see this: Dino Melaye cars, house, jet & updates 2019

Festus Okotie Eboh had the reputation for owning some of the most exotic vintage cars till date. He was often admired whenever he drove past people in the streets. When you pay a visit to his residence at Sapele, Delta State, you will be opportuned to see what remains of his exotic car collection. 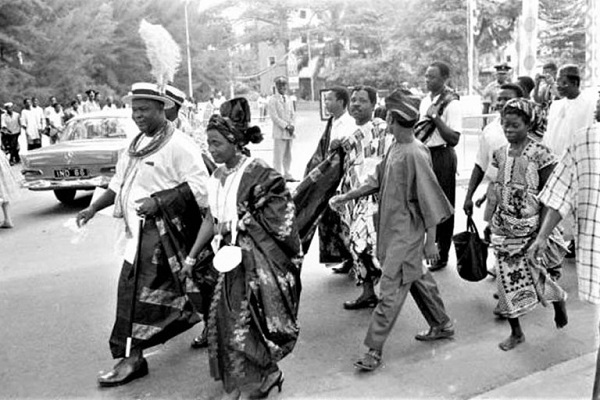 As hardly is there any public picture of Okotie Eboh cars at that time, we suggest here some of the vintage car models this politician probably bought at his time. They are among the most favored automobiles of the rich during the 1950s. 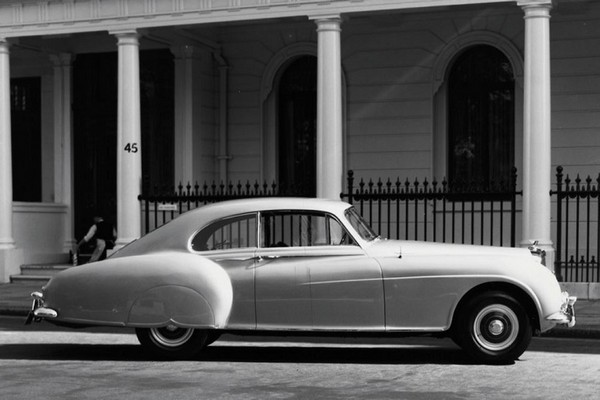 The elegance of Bentley R-Type Continental released in 1952

The very first car among top luxury models during Asheikun prime time is 1952 Bentley R-Type Continental. Its charming design and power were praised by the high-class residents all over the globe. That's why it was probably present in Fetus Okotie Eboh's garage. 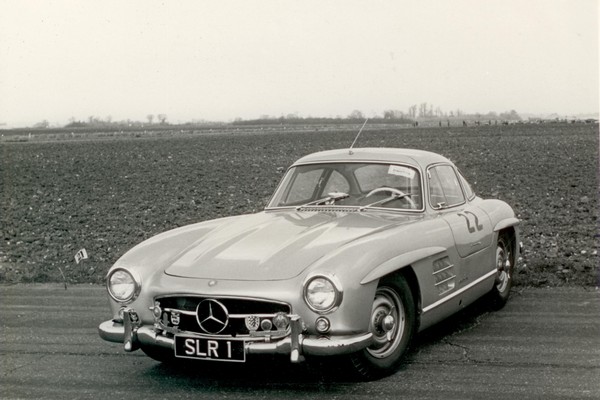 The second candidate we propose for Okotie Eboh cars is the 1955 Mercedes-Benz 300SL. For such a flamboyant man as Okotie who loved showing off, a luxury Benz with the impressive gull-wing design wouldn't pass his attention.

The last suggestion is a Rolls-Royce Silver Cloud of 1955. Festus Okotie might not be able to afford a Silver Wraith like the one carrying the Queen in her first visit to Nigeria but we are quite sure he wouldn't mind spending a large sum of money to acquire a Rolls-Royce to confirm his wealth status.

This man is a much-talked-about figure in Nigerian politic history and of course, there are quite many facts surrounding. Check some of Asheikun's facts below! 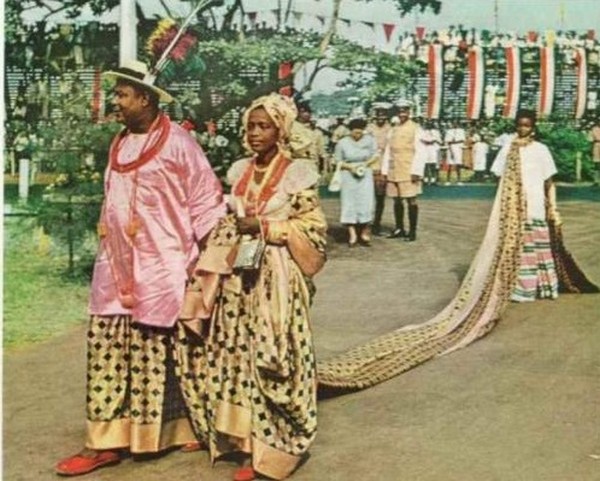 A rare coloured picture of Fetus Okotie Eboh and his wife

>>> Interested in the past figures? Read: Obafemi Awolowo and Nnamdi Azikiwe: 2 legendary statesmen and their cars

He was assassinated on 15 January 1966 alongside some other prominent Nigerians such as Abubakar Tafawa Balewa, who was the Prime Minister, Chief Akintola, Western Premier, Sir Ahmadu Bello, Sarduana of Sokoto and several others in a bloody military coup de tat.

This brought an end to the Nigerian First Republic era. According to speculation, the former minister's body couldn’t be penetrated by bullets, which made them kill him by tying him to a moving vehicle, and dragged till he died. This makes him to fall within the unfortunate list of assassinated politicians in the history of Nigeria. 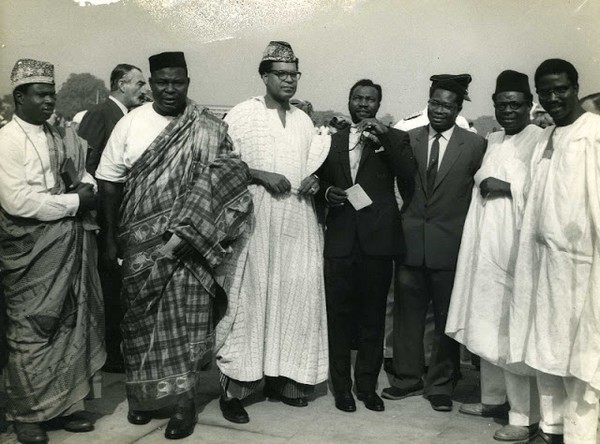 Chief Okotie-Eboh and other politicians of the same period

That's all what we got about Okotie Eboh life and dead. Hope you guys find this post informative, or at least have an overview of Fetus Okotie Eboh cars and luxury lifestyle. No matter how he lived, we must recognize his contribution to the overall development of Nigeria till date.

>>> Many other interesting posts about latest celeb car updates or useful driving tips are available on Naijacarnews.com!