Top 10 richest politicians in the world and their cars

Cars are a luxury which many billionaires in power love to own; our list of top 10 richest politicians in the world and their cars shows what these leaders drive. Check their pics below!

The leadership systems practices around the world command power and money, and the individuals who control them are bound to have so much money. There are business people in with political ambitions who bring their money to win power; whereas the royal bloods and some religious leaders also continue to hold power at different levels of politics around the world. Many people argue that the affluence of these top 10 richest politicians in the world and their cars come from public resources and tax-payers’ money.

These people have easy access to the top class members of the society, more money through some business deals that often come to their doorstep as well as contracts from the Government. We can see them according to their net worth in the table below;

We can now go ahead to see what activities these political minds engage in to make so much money. It is important to know that they also do businesses of some sort as well as enjoy top class luxury. Let's check the top 10 richest politicians in the world and their cars, collected by Naijacarnews.com!

The Russian billionaire and politician was born on 7th October, 1952 in Leningrad of the Soviet Union which is now known as Saint Petersburg; he was married to Lyudmila Shkrebneva and has two daughters.

The President of Russia has been seen as controversial in a lot of his actions, but he has been in power for about 20 years since 1999 till date. Vladimir Putin was Russian Prime minister from 1999 to 2000, then became President in the year 2000 which he served as for 8 years. He repeated the cycle from Prime minister in 2008 and President of his country till date.

Putin owns the 269ft long yacht named ‘Graceful’; it was produces by Blohm and Voss for the billionaire politician, and costs $100 million. He also owns the Baltika yacht and two private jets which are Ilyushin II-96-300 and Dassault Falcon 7X aircrafts as well as some other planes and helicopters. He owns 20 houses, but the largest is the Grande Italianate palace which is worth about $950 million. 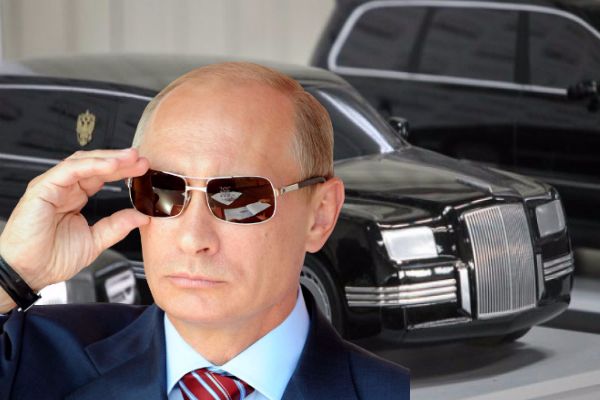 Putin's most famous car is the armored Aurus Senat Limousine

This prominent politician was born in Boston, Massachusetts on the 14th February, 1942. He acquired his top education in Mechanical Engineering at Johns Hopkins University and went on to get a Master’s in Business Administration from Harvard University. Salomon Brothers was the first establishment he got attached with after his education; he later left to begin his financial information company.

Michael Rubens Bloomberg’s wife was Susan Brown who later divorced him in 1993; they have two daughters and have remained good friends since then. He was known to be dating Diana Taylor, a banking superintendent in New York.

His career saw him rise to become partners with Salomon Brothers at Wall Street; he founded the Bloomberg L.P. which grew successfully worldwide. He went into politics to run for the office of Mayor of New York in 2002, Michael got re-elected into the office in 2005. It was in 2008 when he won the office through a controversy.

Bloomberg owns about 15 houses around the world including his Westchester, Hampton, Colorado, Bermuda, and London homes. He has a Dassault Falcon 900B private jet, Agusta SPA A109s helicopters and the Agusta Westland AW609 Tilt-rotor plane/helicopter hybrid. His yacht is a beautiful ship registered in the Caymans like a few others billionaires do since the country has low tax rates. 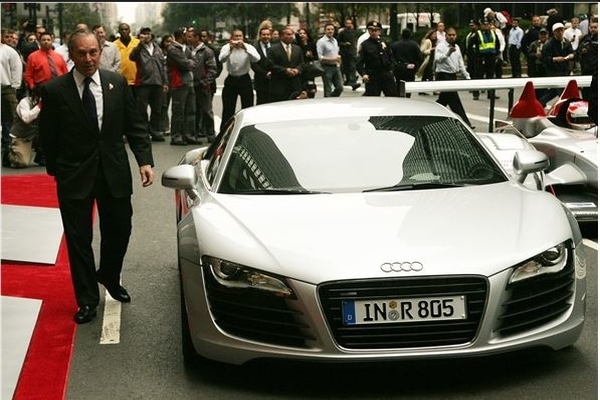 King Maha addressed formally as Rama X, is the present King of Thailand who was born on 28th July, 1952. He got his education from the Royal Military College and had training from the army of the British, USA and Australia. He now inherits the assets worth $30 Billion from his father, King Bhumibol Adulyadej who was the preceding ruler.

The King is married to a former deputy of his security detail, she is now Queen Suthida of Thailand. Maha Vajiralongkorn was married and divorced three times already, and he has seven children. The King owns a Boeing 737 which he flies himself most times since he has a pilot license; he also has 3 more similar planes of slightly different variations. 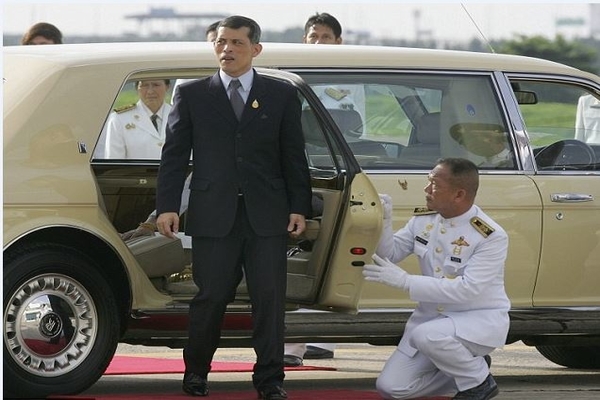 The King of Saudi Arabia who was born on 31st December at Riyadh, 1935 has reigned for about 5 years since 2015. He has 2 wives and about 13 children, his Crown Prince is Mohammed bin Salman.

He owns the Erga Palace in Riyadh, and an expensive house in Switzerland as well as some other luxury estates around the world. Salman owns a yacht which is the length of a football pitch docked at Marbella, Spain. Salman bin Abdulaziz Al Saud's private jet is a large airplane that once carries 1500 entourage, two Mercedes-Benz S600 and massive luggage. 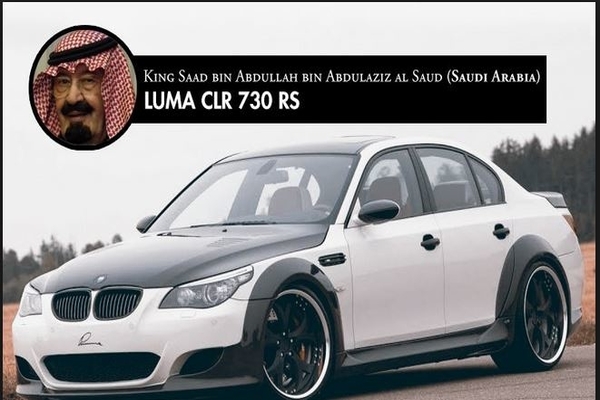 The billionaire head of State who was once the richest man in the world from oil and natural gas resources before the technology boom and computing era. The current Sultan of Brunei was born on 15th July, 1946 and attended the Royal Military Academy Sandhurst, UK. Hassanal has been in three marriages but divorced the second and third wives and stripped them of all their royal titles. He has 5 sons and 7 daughters with the three wives he married.

The leadership of Hassanal Bolkiah had started with his positions as 29th Sultan in 1967, he has since established many offices which he handles personally. He rules as one of the last absolute monarchs; and his country is one of the few places without tax or public revenue.

He owns a $350 million palace in Brunei, and so many other houses around the world which includes locations like UK, USA. The Sultan owns a collection of jets including the Boeing 747-400, Airbus A340-200 and Boeing 767-200; the Bolkiah yacht collections are so many.

This ruler is a car enthusiast along with his younger brother Prince Jefri and his first son; there are approximately 7000 cars or more owned by this monarch. 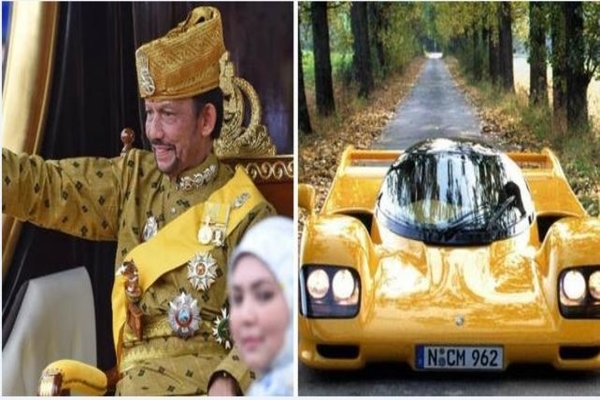 Hassanal Bolkiah is renowned for the massive car collection

The Emir of Abu Dhabi was born on 7th September, 1948; Khalifa graduated from the Royal Military Academy Sandhurst. He is married to Sheikha Shamsa bint Suhail Al Mazrouei as his first wife who has 8 children with him.

Sheikh Khalifa holds the title of the President of Abu Dhabi some major offices of command in the country. He became the President in 2004; and on the 4th January, 2010, the tallest building on earth which was the Burj Dubai was renamed Burj Khalifa in the honour of the Emir.

He owns the Azzam, the longest private motor yacht in the world today; he also owns the Bombardier Challenger CL605 as his private jet. The palaces of the Emir includes the Al Bateen palace, Qaşr al Mushrif palace, and Qaşr al Watan which is the Presidential palace.

This royal leader has about 39 super cars in his collection, and they include the following; 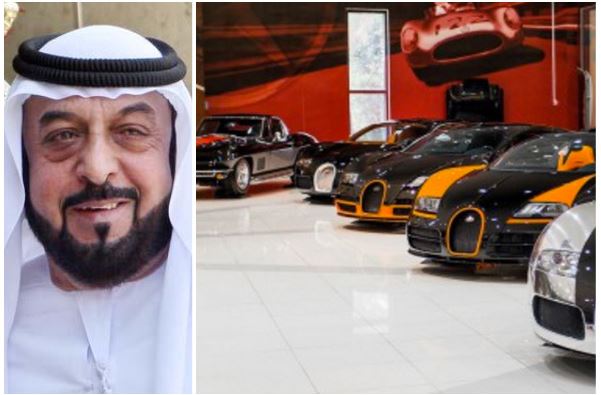 >>> What about our richest man in Africa? Aliko Dangote car collection, house & life facts will make you drool

The ruler of Dubai was born on 15th July, 1949; at Alshindagha, Dubai, UAE. He studied at the Al Shaab School, University of Hagen, and Royal Military Academy Sandhurt. He has 2 known wives as well as a few wives with quiet identities, and about 24 children, and his second wife is currently requesting a court order to protect her from Sheikh Mohammed.

He started his leadership as the Minister of Defence and then he continued to become the ruler of Dubai before being chosen as the Vice President of the United Arab Emirates. He got nominated by the President, Sheikh Khalifa to be the Prime Minister. Sheikh Mohammed Bin Rashid Al Maktoum has been making huge success with putting Dubai on the spotlight.

He owns many houses which includes the Longcross Estate and Dalham Hall in England; he also purchased the Monaco Penthouse, Inverinate Estate in Scotland, Gainsborough Farms and Stud in USA, as well as so many other houses. He owns some golf courses and the yacht, Dubai. 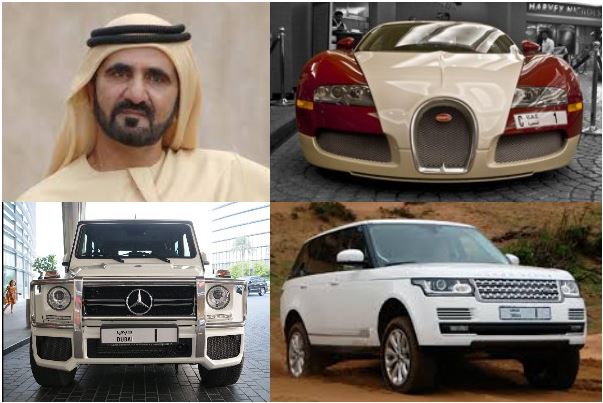 This Italian politician was born on 29th September, 1936 at Milan in Italy; he had been married and divorced twice and has 5 children. He owns Fininvest as well as S.S. Monza 1912 Football Club. He was the A.C. Milan FC former owner and

His career in politics went big in 1994 as the Prime Minister of Italy up to four different times, but he is currently a member of the European Parliament. Silvio Berlusconi belongs to the Forza Italia political party and has a few other political attachments.

This political billionaire owns the Villa San Martino, Arcore as his personal residence, as well as Villa Certosa, his biggest house located on Sardinia Island and some other houses around the world. Silvio owns some media houses, banks and advertising agencies in Italy. His private jet is a Hawker Beechcraft 750 and Gulfstream V; and 3 yachts being the Suegno which got damaged in a storm in 2018, a Morning Glory yacht and the Principessa Vaivia. 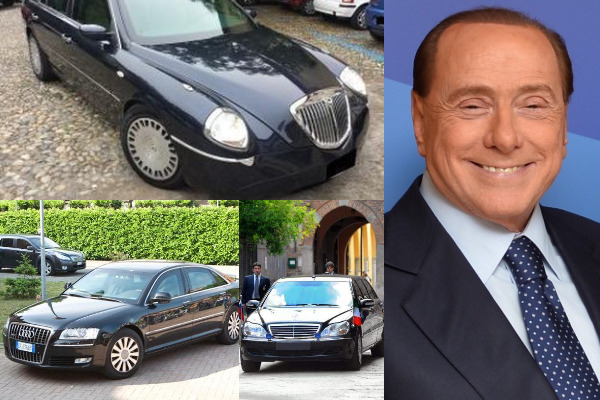 Silvio Berlusconi has several armored cars and a private jet

>>> A prominent politician in Nigerian history: Festus Okotie Eboh cars, net worth, death and other facts

This man is a Chinese businessman and politician who was born in October, 1945 at Hangzhou, Zhejiang, China. He is married to Shi Youzhen, and they have a daughter together. Zong Qinghou is the CEO of Hangzhou Wahaha Group of the food industry in dairy, and drinks, who is interested in technology. There is news that he plans on starting out a car manufacturing company; and a technology research laboratory in Israel he had been investing on.

He was delegated in the People’s Republic of China as a member National People’s Congress in 2002 and won the position in 2007 as well. He stays modest with spending, and claims to spend only $20 daily; so we may not find so much luxury possessions on him. 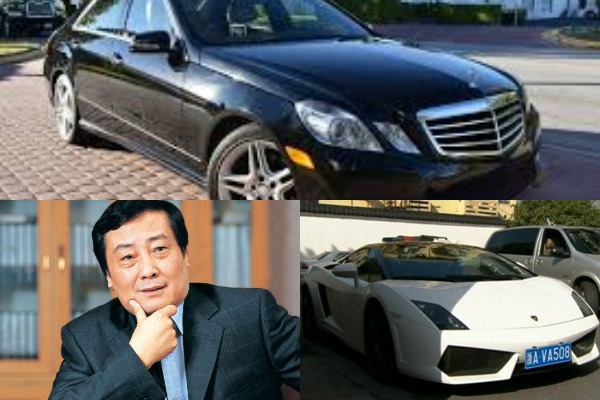 Zong Qinghou has a modest car collection considering his net worth

This courageous Indian woman is the richest female in our list of top 10 richest politicians and their cars. Savitri was was born on 20th March, 1950 at Tinsukia, Assam, India; and has studied till Diploma level. She was married to O. P. Jindal who is late now, but had 9 children with Savitri.

She held the position of Minister of State for Housing, Disaster, Revenue and a few other responsibilities. She was also a member of the Haryana Legislative Assembly, a positions he lost in the 2014 elections; she belongs to the Indian National Congress party. Savitri Jindal currently heads the Jindal Group of Companies since her husband died.

This modest and rich woman lives in a glass and concrete bungalow in Delhi, India; and she disclosed to the press that her company always builds a hospital and school wherever they set up a factory.

She had been reported to not own a person car, but she moves around in a BMW or any other official vehicle arranged for her. 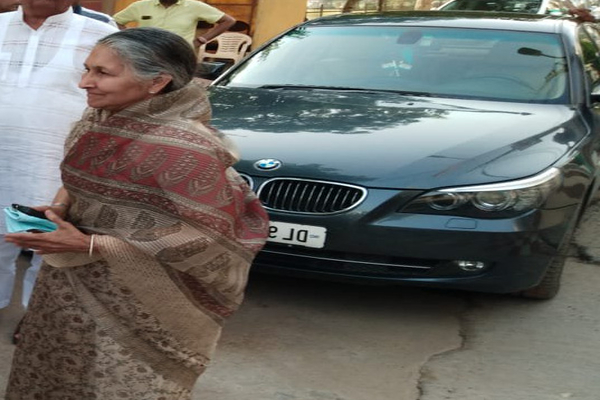 Savitri Jindal rides in any car assigned for her

A quick review of the top 10 richest politicians in the world and their cars show how different people with random identities can get hold of power and so much money. Ranging from royals to democratic individuals who do business. The cars they drive has revealed how enthusiastic different people can be about luxury.