One chance operators stealing from passengers have been caught and set ablaze in Abuja. See the video below!

One chance operators who pose as drivers plying the roads and terrorizing commuters in Abuja are in for a shutdown.

Reports reaching Naijacarnews.com say two suspects were caught and set ablaze together with their cars by an angry mob in Abuja.

The suspects were said to have robbed a woman inside a car at Dutse Alhaji, a remote area in FCT and pushed her out of the moving vehicle. They were caught, stoned to death and then set ablaze. Their operational car wasn't spared as it was also set ablaze. "The one chance robbers, after taking their victim’s money, phone and other belongings, pushed her out of their vehicle, but some Okada riders saw them and gave them a hot chase.

They caught up with the robbers under the Dutse Alhaji bridge. They burnt two of them inside their vehicle while the third one who attempted to escape into Dutse Alhaji market was also caught and stoned to death. His body was then set ablaze with old tyres and fuel." 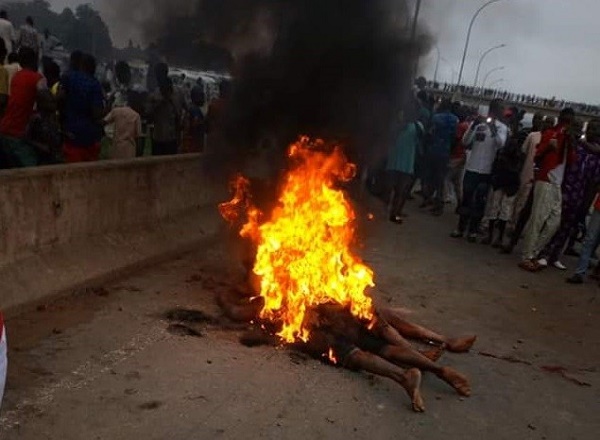 The two suspects as they were set ablaze

Watch the video of their burnt vehicles

The police couldn't save them as they were immobilized by the mob who were bent on carrying out jungle justice on them.

This should serve as a warning for other one chance operators out there.