As more airline operators begin to move into the new international terminal at the Abuja airport, Naijacarnews can confirm that the first European airline just joined the group.

Lufthansa a big European international airline has officially moved its flight operations, to the newly constructed Nnamdi Azikiwe international airport terminal in Abuja. It will be the first European airline to do so since December 2018 when the terminal was open for use.

Lufthansa’s Airbus 200-300 series is its first operation in the new terminal, landing at 5:30 pm, with 110 passengers and four crew members on board.

You will recall that the Federal Airports Authority of Nigeria (FAAN) has stipulated March 31st as the deadline to all foreign airlines to relocate their operations to the new terminal.

The FAAN’s Regional General Manager, Mahmud Sani, who is also the North Central and Abuja Airport Manager, had said that the ultimatum given by FAAN to airlines that made Lufthansa move its operations to the terminal. He also confirmed that other international carriers were already making their final plans to make the March 31st deadline. 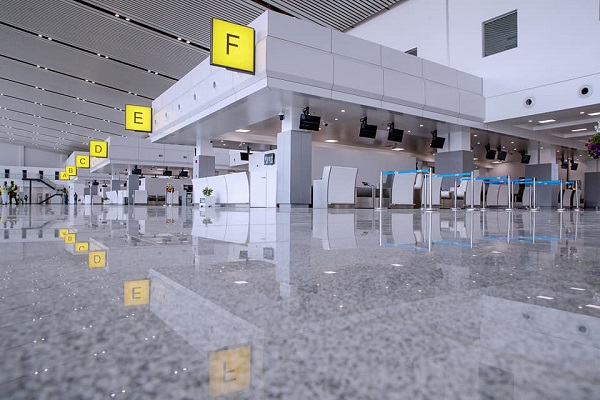 The world-class facility of the new Abuja international airport terminal!

“For now we have six international airlines here and the rest six are coming in between now and March 31. We have Lufthansa today, Ethiopian Airlines is on, we have Emirate, Air Côte d'Ivoire, Asky and Air Peace.”

Mr. Sani made it known that FAAN has made available free trolleys for passengers, as well as making plans for free wheelchairs to be made available for persons with disabilities. He, however, made it clear that FAAN had capable hands to adequately maintain the new facilities at the Abuja international terminal.

On board of the Lufthansa airline was the honourable minister of labour and employment, Dr. Chris Ngige, who praised the government for providing the new terminal, as a manifestation of its commitment to the development of the country. Dr. Chris, who just came back from Geneva, after attending the International Labour Organisation (ILO) Governing Board Meeting, boarded the Lufthansa flight back to Nigeria. He also admonished FAAN to continue its high standards of maintenance, saying this should be different from what Nigerians used to know in airports.

“We have done the needful and we have emulated the good part of the world, we have joined them because this is what we see in Geneva and Frankfurt and so on. We have it now in Nigeria and so it is for us to maintain it,” Dr. Chris had said.

The Head of Service (HOS) of the Federation, Winifred Oyo-Ita, said of the new terminal that, it confirmed what the President Muhammad Buhari’s administration had been doing to bring Nigeria up to the level of developed nations. She noted that the operations on arrival at the terminal like the medical screening camera and immigration were impressive.

“In this age of Ebola and other viruses, the screening is very important to check those that are coming in to detect if they are carrying any virus. This is an international standard and I know that the airport authority is going to maintain it,” she concluded.

Mr. Charles Okoh, who also flew in from Vienna, Austria, did not fail to commend FAAN and other agencies of government that provided services at the airport.

He said there is absolute professionalism in the way all the agencies handle things on arrivals.

“I am also impressed with the level of cleanliness because when I arrived, the first thing I did was to go into the convenience and it was clean. I am happy to know that our country has a worthy airport,” he iterated.

>>> Find more Breaking car news in Naija market and from around the world here!