Innovation takes place every day and this time, Mercedes Benz is testing rear-seat airbags for passengers at the back. We're not quite certain about its production, but we can hope to have the feature in our future cars. Keep reading to find out the pros and cons.

Airbags are life savers, they have become a crucial part of a vehicle's overall safety assessment over the years. Although airbags don’t guarantee a 100% safety, they have at least reduced car injuries to some extent and the feature won’t be departing cars anytime soon.

We’ve seen several kinds of airbags - knee airbags, curtain airbags, and side airbags too but we haven’t exactly had the luxury of seeing specific airbags for rear occupants. This is probably why Mercedes-Benz is giving it a shot, the marque is currently previewing the concept. Adoption of the Mercedes-Benz rear seat airbags concept isn’t quite far-flung yet but we may begin to see the feature in cars once it is tested and trusted. 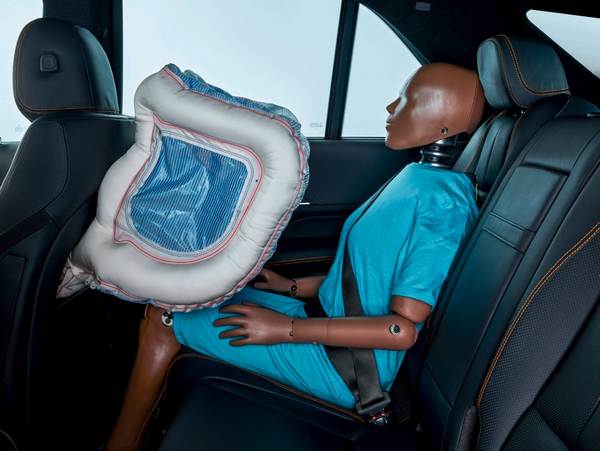 The back seat airbag concept is quite different from the front, side or curtain airbags, it is placed on the backrest of the front seats. When fixed, it's like placing the front airbags at the back, in order to protect the neck, face, and head in case of a frontal collision. Mercedes-Benz put this to effect and the result of the test showed that injuries were reduced by 30%.

>>> The German automaker is ready for breakthrough technologies: BMW & Daimler-Mercedes says we should expect their autonomous cars on road by 2024

However, you can expect some complexities to the back seat airbag feature, Mercedes-Benz can guarantee this too. The major concern of their designers is the mounting point of the rear seat airbag, they need to consider small-sized occupants (like children) and child seats too. In the front seat, there’s the dashboard, steering wheel, and the likes. Also, while these features are fixed, the front seats are usually adjusted. In other words, the deployment of the back seat airbag will, to a large extent, depend on the front seat position, as well as the recliner.

Although Benz isn't exactly giving us a guarantee of producing this rear-seat airbag feature, it's an aspect of Mercedes-Benz's interest in rear-seat passenger safety.

However, there's a downside to this airbag idea. Remember the center rear-seat? The one you can vividly see the dashboard from? Well, that passenger isn't so lucky because there's no front seat ahead of him/her. While Mercedes-Benz is still testing this feature, let's hope they figure something out for that middle-seat passenger.

Until then, let’s always remember to drive safely.

Check out this CNET video on the Mercedes-Benz rearseat airbags:

>>> Meanwhile, we have countless articles on car safety tips on Naijacarnews.com you can learn from!