With Mercedes-Benz having to make changes to some of its models, it still managed to sell over 150,000 cars within 28 days setting some unprecedented record.

Naijacarnews feels that how a product fares in the market depends on the value perception of the buyers. What people feel is the value or worth of a product will to a large extent inform how they purchase that product.

The Mercedes-Benz is a product that is perceived as a high-value product, and this is why its teeming buyers pay a premium to get it. Mercedes-Benz has no doubt enjoyed huge sales in previous years in different auto markets around the world, and this year is not about to be the exception.

A wholesome view of the sales!

Worldwide sales of this luxury brand have seen the delivery of 333,229 cars across the world. But that is not all. Perhaps the most interesting thing is that over a period of one month in February this year alone, the three-pointed star brand made car sales of 152,690 worldwide (-6.7%). There was also a huge impact on SUV and Compact cars’ sale due to the model changes made in these segments.

For Britta Seeger, a member of the Board of Management of Daimler AG and who is in charge of Mercedes-Benz Cars Marketing and Sales had said this:

“We are delighted that the new B-Class has had such a positive impact on Mercedes-Benz unit sales so soon after the market launch in Europe. At the Geneva International Motor Show, we presented the latest generation of our top-selling SUV, the GLC, which will ensure further enthusiasm among our customers this year,”  He further stated: “We assume that the on-going model changes will result in significant sales impetus in the coming months. At Mercedes-Benz, we continue to see strong demand worldwide for our current and new models.”

Taking a look at the sales of Mercedes-Benz across different regions, it would be seen that a total of 63,560 units were sold across European countries in February alone (-0.1%). The decrease in sales was as a result of the model change of the GLE model. Of the total delivery in Europe, 23,119 sales were made in Germany (7.3%), representing an increase and the best sales for 10 years for the month of February. What made the difference were the models like the A-Class, B-Class, the new C-Class saloon and the Estate. This positive difference in sales was also experienced in France, Belgium, Russia, the Netherlands, and Poland.

Asia received delivery of 59, 253 Mercedes-Benz in February alone (-9.8%). With a particular focus on China, where the sale is generally low after the Chinese New year, 40,733 Mercedes brands were bought (-5.4%). With a total sale of 112,430 Mercedes-Benz units in both January and February giving a (+0.9) increased sale that is better than ever. 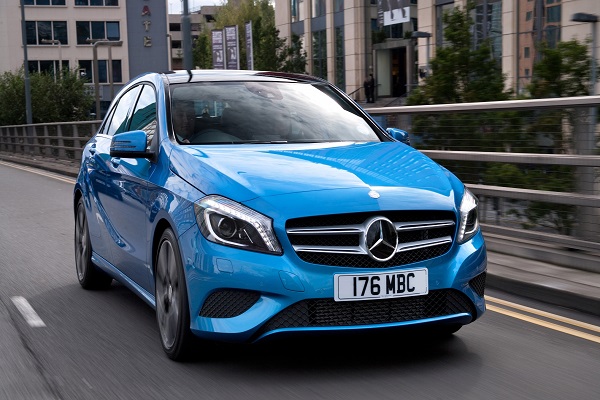 This Luxury Mercedes A-Class is the first choice among luxury cars from Europe to China!

Mercedes-Benz had a total sales of 25,757 units in the NAFTA region (-14.0%), with the US claiming 21,660 of those sales (-12.5%). The decrease in sales was also as a change in the model which saw model like the GLE fall with a double digit. Still, the C-Class saloon made a double-digit increase in sales for February in the US.

Brands of Mercedes-Benz were warmly received in the first two months of 2019 that saw models like the A-Class, B-Class, CLA, CLA shooting as well as the GLE sales rising slightly with 81,700 cars sold. Although the changes in the compact car are extended, the A-Class is still enjoying an increased growth monthly for 6 consecutive months (+20.8%). Also, the B-Class has since its launch on the 16th of February continued to enjoy double-digit growth across Europe most especially in countries like Germany, the United Kingdom, France, and Spain.

For the C-Class Saloon and Estate, sales have been doing pretty well with 66,500 units sold in just January and February accounting for a +4.9% increase. The C-Class Estate, for instance, had increased growth in sales of +15.8% in February globally. Records show that for February, 1 out of every Mercedes-Benz sold was either a C-Class saloon or an Estate. The rare beauty of the C-Class quickly gave it massive acceptance!

A breakdown of the dream Mercedes-Benz cars shows that 11,000 Coupés, Cabriolets, and Roadsters were sold between January and February and that 1 out of 4 dream car sold worldwide was a CLS Coupé.

The Mercedes-Benz smart brands culminated with a total sales of 7,854 units in February alone, with the urban microcars (both 2 door and 4 doors) setting an all-time sales record of 11% increase. Other European countries also bought cars including France, Portugal, and Switzerland, taking the sales to double-digit growth.