Next-gen Hyundai i10 City car teased ahead of Frankfurt debut

Hyundai has revealed a sketched drawing showing an upgrade on the Hyundai i10 set to be premiered at the Frankfurt show in September. hyu

South Korean car manufacturer, Hyundai, has just released to the public an official sketch of the 2020 Hyundai i10 City car slated to be debuted at the Frankfurt Motor Show, which will commence on September 12-22, in Germany.

The real i10 City car won't be coming out just the way it's been sketched in the drawing. Naijacarnews knows this because the sketch is over-stylized. However, the sketch has given us an idea of what the new model will look like. And just like Hyundai says," the 2020 Hyundai i10 City car has an energetic and agile look."

Looking at the front, it's a fusion of a new grille with a bold design which incorporates circular fog lights at both corners. The bumper comes with sharp new headlights and angular air intakes at the end. 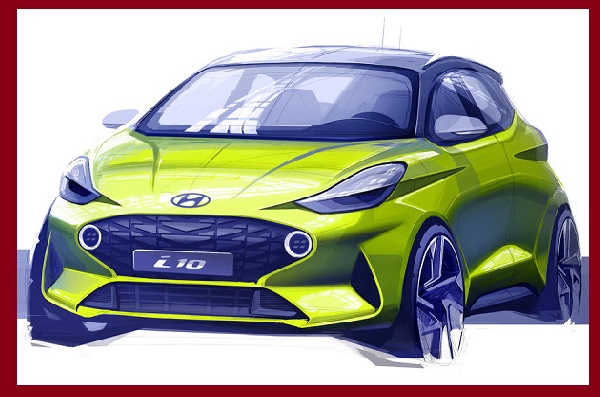 The all-new i10 has a young and dynamic design that stands out in the A-segment. Its wide front grille expresses a sporty character and incorporates the daytime running lights, thus continuing this feature of the i10’s heritage

The South Korean automaker also stated that the new model will be featuring advanced techy equipment like Lane Keep Assist System, Driver Attention Warning, and Forward Collision-Avoidance Assist, which has a front radar sensor. Not only that, other highlights include Android Auto wireless smartphone charging, Apple CarPlay, rear-view camera and more.

There are speculations that the 2020 Hyundai i10 will have 3- and 4-cylinder engines. We’ll keep our fingers crossed on that until its debut.