Did you know that the current top-selling electric car is the Nissan LEAF which has now hit over 400,000 sales in the global auto market? Read the gist here!

While we are still here at NaijaCarNews.com thinking about when electric vehicles will storm Nigeria, the Nissan LEAF just got announced to be the top-selling electric car in the global market for now. How come just one unit out of the recorded 400,000 sales was never acquired by a Nigerian?

In a recent update we got, it is recorded that as of today, the Nissan LEAF is the first among all current electric vehicles to hit a gigantic 400,000 sales worldwide.

This was made known by Nissan in a public announcement where the brand claims that the 400,000 is a cumulative record number of the Nissan LEAF sold ever since December 2010 that it was introduced into the global auto market. 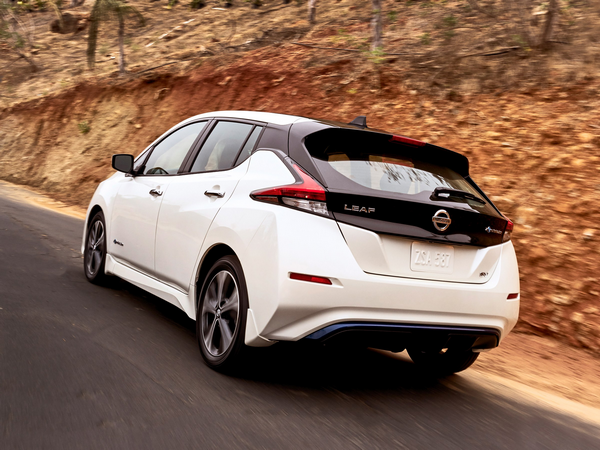 According to the brand’s estimations/calculations, the entire 400,000+ Nissan LEAFs has exceeded 6 billion miles (10 billion km) total mileage which means that the fleet currently saves over 3.8 million oil barrels per year.

This Japanese flagship is being currently produced in 3 continents namely; Smyrna (Tennessee), Sunderland (England), and Oppama (Japan). The Nissan LEAF is currently available in over 50 global markets and it's even expanding to 6 more new markets in the Latin America regions by the first half of this 2019 as well as adding 7 more in Oceania and Asia by 2019 end.

The LEAF had already started breaking records since 2018 when it became Europe’s best-selling electric car with over 40,000 units sold back then and in Norway especially, it crowned the top-selling vehicle of any kind around that same period.

Here is the Nissan’s official press release statement on this breakthrough;

“Introduced in 2010 as the world’s first mass-market electric vehicle, the Nissan LEAF has led the way in making the excitement and convenience of electric driving accessible to non-luxury buyers. Less than a decade ago, electric cars were seen as a niche product, and LEAF customers were mostly “early adopters.”

Today, a growing number of consumers say their next car may be electric. Customers are choosing the LEAF for its powerful, agile performance and advanced technologies, such as the ProPILOT Assist semiautonomous driving system1, in addition to the benefits of sustainable mobility.”

“In launching the first-generation LEAF, Nissan pledged to become a global leader in producing and promoting vehicles with zero tailpipe emissions. The company committed itself to work with governments and utility companies to support the adoption of electric vehicles, make charging them easier and more convenient, and develop second-life uses for electric car batteries.”

Since 2010 till now, the Nissan LEAF has been experiencing great success, see its milestones below;

“This milestone is a powerful statement that 400,000 customers, and counting, value the Nissan LEAF for the excitement, confidence and connection it delivers. The LEAF remains the icon of Nissan Intelligent Mobility, our strategy for moving more people to a better world.” 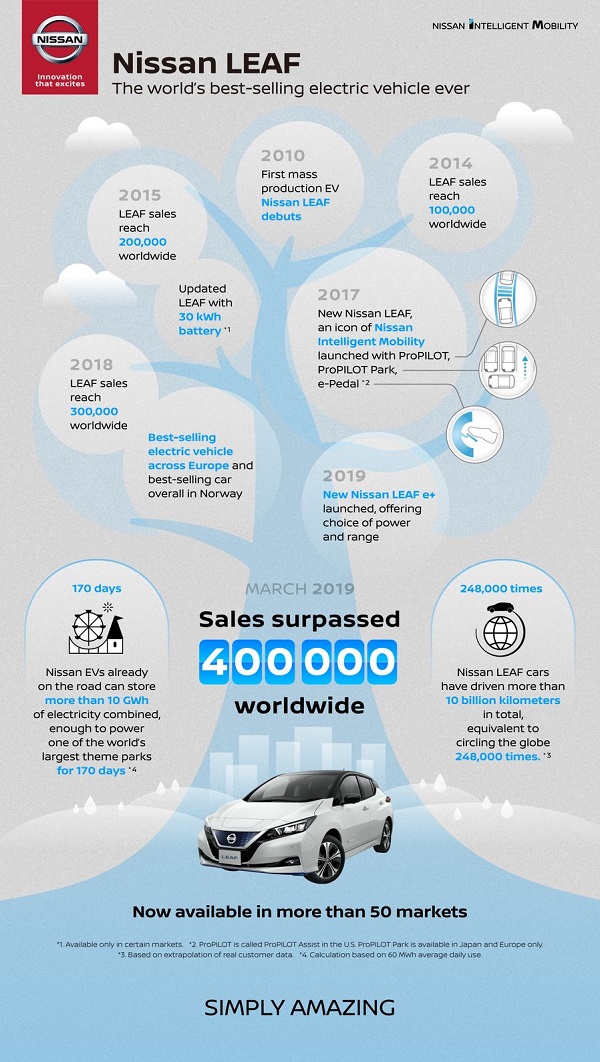 Its been an impressive success record so far for Nissan on its LEAF electric vehicle. We only wonder if the company will be able to keep up such standard with the currently increasing competition in the electric cars market.

And we hope that some of our Nigerian electricity issues can be resolved soon to enable us to enjoy this new wave of zero-emissions electric vehicles rather than just being spectators of the current innovations.

Video: 2019 Nissan Leaf Plus SL Review: Exactly what you expect