Although Tesla cars are not completely self-driving, they keep implementing features are that inching towards a full self-driving option. For now, Tesla cars can diagnose themselves and pre-order parts. To find out the most interesting news about Tesla, keep reading.

Once more, Tesla has improved its electric cars’ ownership experience. Before now, a recurring problem with Tesla’s service was the availability of parts, but as recently reported by a Model 3 owner, Tesla’s vehicles now have the capability to self-diagnose issues and automatically pre-order replacement parts when needed, reported to Naijacarnews.com!

“An unexpected condition has been detected with the Power Conversion System on your Model 3. A replacement part has been pre-shipped to your preferred Tesla Service Center. Please use your Tesla Mobile App or your Tesla account to schedule a service visit appointment now.”

As soon as the parts are ordered, Tesla owners can set up an appointment at a service center to get their vehicles fixed.

Earlier this year, Tesla Co-founder and CEO, Ellon Musk, pledged to improve the service experience for the electric car owners, stating that “service is his number one priority”:

In addition, Musk added that owners would be able to cancel it right away if they think it’s not necessary.

Tesla confirmed the new pre-order feature in a tweet: 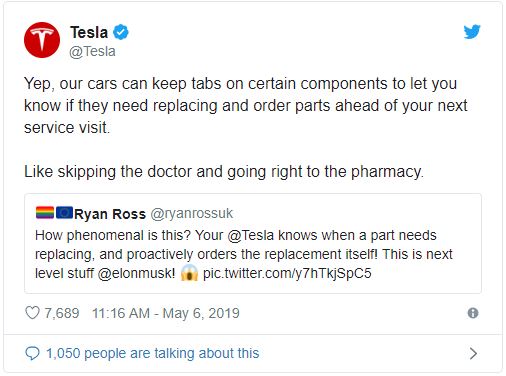 Tesla replied a Twitter user regarding the new remarkable feature

Now that the car parts will be ready once the owner acknowledges an appointment, they won’t have to wait for long to have their cars serviced. The highly thoughtful proactive feature makes it possible for Tesla to minimize the time required to address the maintenance needs of each of its vehicles in North America. 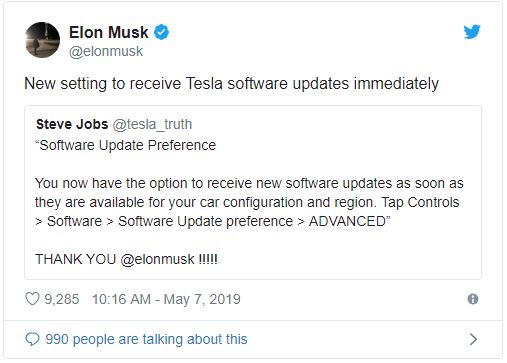 >>> On another development, Tesla investigates the trending car fire incident in Shanghai. Check the link for more!