Many might know Jay Kay for his great musical talent, but you might not know him to have strong love for cars. Click here to see as Ferrari GTCLusso owned by Jay Kay being painted purple!

The prominent lead singer in the Jamiroquai, Jay Kay, is not only about music but has a very strong passion for automobiles. He is in possession of multiple exclusive and costly cars in his collection, which include the custom-made Kermit Green Ferrari LaFerrari. 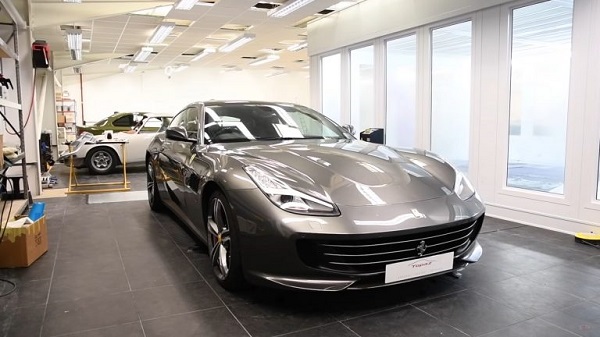 Undoubtedly, Jay Kay loves leaving a big mark on many of his super expensive and high performing rides. We are really surprised at the amazing purple paintjob done to his grey GTCLusso despite having strong reputation for getting his car customized to taste.

Despite the rigour of applying lot of vinyl wraps to achieve these things on a car, the musician wanted something out of the ordinary. Jay took a step farther by going for full re-spray, hereby employing the service of London-based Topaz for this amazing work. The exterior and interior trim was dissembled by the company before colour-changing preparatory process. The new shade, which is Rolls-Royce Purple Silk, would have probably cost Jay Kay few tens of thousand bucks in dollars, if it was handled by Ferrari.

There is definitely no way you won’t get your head turned by mere looking at the finished work, which came with golden wheels. Each and every crease was repainted, making it so difficult to argue about the paint originality. These painters really outdid themselves with this amazing masterpiece.

>>> Catch up on celebrity cars and other car news updates here on Naijacarnews!